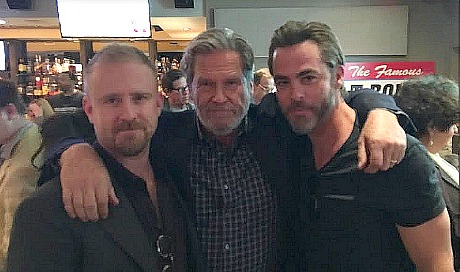 (l. to r.) Hell or High Water costars Ben Foster, Jeff Bridges and Chris Pine during press-schmooze party at Bludso’s Bar & Que on La Brea. Let there be no doubt or hesitation on the part of any blogaroo in proclaiming that Hell or High Water is easily among the year’s best. 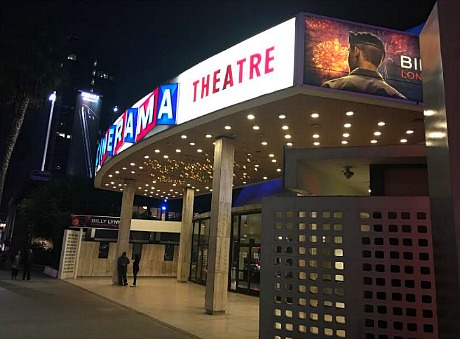 Last yesterday afternoon at Pacific’s Cinerama Dome, I went to see Billy Lynn’s Long Halftime Walk for a second time. I can’t tell you what the foot lambert count was (the brightness and clarity seemed fine) but unfortunately the image was very slightly taffy-pulled in a horizontal fashion — everyone’s face appeared a tiny bit fatter or wider than in the version I saw projected at Loews’ Lincoln Square a few weeks ago. 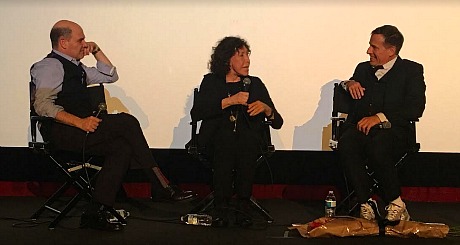 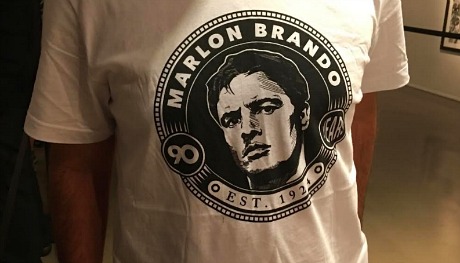 Marlon Brando T-shirts handed out during the recent one-night showing of Universal’s restored version of One-Eyed Jacks. Criterion’s Jacks Bluray will pop on 11.22. 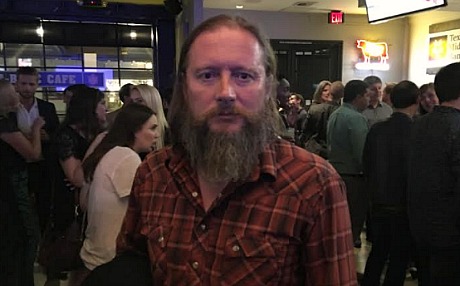 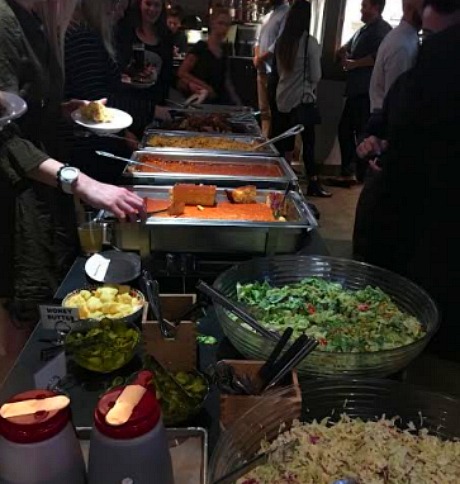 I’m about to catch the latest digital restoration of Citizen Kane (4K, nitrate negative) at the Egyptian. Donald Trump is a big fan of Orson Welles‘ 1941 classic, and two days ago a Buzzfeed piece by Allison Willmore pointed out the similarities between Trump and Charles Foster Kane: (1) They both carved out their own empires with the help of family money, Trump in real estate and Kane in newspapers; (2) They both divorced twice, though Trump, unlike Kane, would marry a third time; (3) They both own cavernous Florida estates with fanciful names, Trump’s Mar-a-Lago and Kane’s Xanadu; and (4) when both run for office, it’s on a platform that stresses personality and pugnaciousness over policy.

John Madden, Jonathan Perera and Jessica Chastain‘s Miss Sloane (Europacorp/Film Nation, 11.25) is a moderately decent governmental potboiler. But it feels more like a cable series pilot than a theatrical stand-alone. A couple of critic friends were creaming over it — my reaction was more circumspect. It’s very plotty, very Aaron Sorkin-esque, very Newsroomy. Except the setting is a progressive D.C. lobbying firm instead of a Manhattan cable news station.

I’m presuming that women will like Chastain’s steely, take-no-prisoners samurai personality and maybe some guys, but it’s basically a two-hour pilot for a Showtime series about a ruthless but effective superwoman lobbyist who cuts through the bullshit and always aces her enemies, even though she has no life, pays for sex and takes pills to sleep (or is it to stay awake with?). But every week she wins.

Somebody really should pitch this — seriously. Brittle, tough-as-nails super-lobbyist who advocates for the right things and pisses off the male establishment. Tough shit, guys, but this lady will leave welts on your ass.

It’s definitely not Michael Clayton (which one critic friend compared it to), and it’s a whole different package than what Spotlight served or had in mind, and Chastain, trust me, played a much cooler character in Zero Dark Thirty. She’s basically playing Jeff Daniels in The Newsroom but with a different set of hang-ups and much hotter gams and a totally killer wardrobe. The presence of costars Sam Waterston and Allison Pill also reminded me of The Newsroom.

I always regarded Leon Russell in somewhat the same light as Doctor John, Lynyrd Skynyrd, Gregg Allman — southern blues rockers with raspy, gravelly voices and a grizzled, studly rock-star flamboyance. Born in Oklahoma, Russell broke into the music business as a session man in 1958, and then suddenly became a headliner around 12 years later. A friend who was a big blues aficionado back then always thought Russell was an inauthentic, egoistic poseur…really? That always sounded harsh to me. Russell peaked in the early to mid ’70s (“A Song For You,” Mad Dogs & Englishmen tour , and probably most famously when he sang his “Jumpin’ Jack Flash” and “Young Blood” medley at George Harrison‘s “The Concert for Bangladesh” (during which he and Harrison also sang harmony as Bob Dylan sang “Just Like A Woman”). Yes, he became an overweight Father Christmas figure with a huge, snow-white beard, but he kept on playing and playing. And now he’s gone — sorry. Condolences to friends and fans, due respect, etc.

If I had somehow appropriated Ethan Coen‘s witty, mordant humor and written his N.Y. Times “2016 Election Thank You Notes” piece myself, nearly the exact same article would have resulted. I would have, however, added four extra “thank you!”s to the eight Coen listed.

9. Low-information black voters who stopped Bernie Sanders’ momentum and more or less ensured Hillary Clinton’s victorious lead in the Democratic primary race. We can argue the reasons for Hillary’s dark electoral fate, but we now know for sure that losing was in the cards all along. Millions of us believe that Sanders, who caught on bigly because he spoke to the same working-class frustrations that Trump did, could have won in the end. (A Presidential race between two change candidates would have been tight, but I really think Bernie would have edged Trump out because of his obvious moral decency and intellectual superiority.) But his campaign died when southern African American voters shunned him at the polls. The reason was that they weren’t “all that familiar” with Sanders, and that they felt a natural kinship with Clinton because she’s associated with the liberal largesse of her husband’s administration. Nobody wanted to say that “aren’t all that familiar with” was code for (a) lazy, incurious, low-information attitudes and (b) a brilliant presumption that despite Sanders having gotten arrested for demonstrating for civil rights in the mid ’60s, a U.S. Senator from a mostly all-white state (i.e., Vermont) can’t be trusted to understand or respond to the concerns of black voters. Well done, fellas!

10. Jon Stewart for his refusal to launch his own Presidential campaign in the wake of his retirement from The Daily Show. Don’t kid yourself — the first serious Jewish presidential candidate would have beaten the pants off Trump. People don’t care if you’re a professional politician or not — they just want to vote for someone they like and trust and can relate to. Stewart is smart, passionate, personable, knows his stuff. If he’d had gone all-in, he could’ve done it. I’m not joking — he really could’ve saved us from a Trump presidency. But he decided to spend time with his kids instead. Final thought: Spending time with your kids at the breakfast table is well and good, but kids learn and grow by their parents’ example.

Hulu has all but deleted the little black girl’s allusion to female genitalia in last night’s SNL skit about kids discussing Donald Trump — i.e., “His name’s pussy.” What they kept in was “ussy.” (Not a typo — they cut out the “p” sound.) Here’s what the girl said in the actual skit. “[Trump] unleashed racism and xenophobia. We now must return to the dark ages of white presidents. Also my dad said that Donald Trump will stop and frisk my cat. We have a black cat. His name’s pussy.”