Yesterday’s (5.31) inconclusive Slate story by Franklin Foer had me for a while. It laid out several indications that some kind of private server may have been established between the Trump organization and the Russia-based Alfa Bank, and it sounded intriguing at first read. But Vox’s Timothy B. Lee has argued that Foer’s circumstantial evidence doesn’t quite add up. 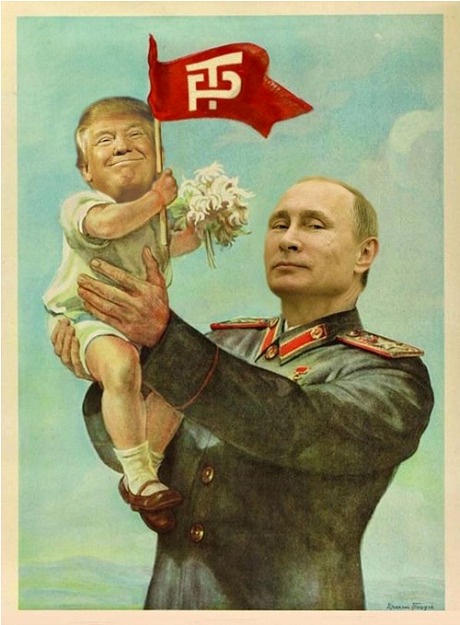 “Foer and his sources aren’t the only ones who have been interested in the flow of traffic between the Trump Organization and Alfa Bank,” Lee writes. “The FBI, the New York Times and other media organizations have all investigated the story. And so far none of them seem to believe that they’ve unearthed signs of a secret link between Trump and the Kremlin.”

More persuasive is David Corn’s 10.31 Mother Jones piece stating that “a former senior intelligence officer for a Western country who specialized in Russian counterintelligence tells Mother Jones that in recent months he provided the bureau with memos, based on his recent interactions with Russian sources, contending the Russian government has for years tried to co-opt and assist Trump — and that the FBI [has] requested more information from him.

“This is something of huge significance, way above party politics,” the former intelligence officer tells Corn. “I think [Trump’s] own party should be aware of this stuff as well.”

“Is the FBI investigating whether Russian intelligence has attempted to develop a secret relationship with Trump or cultivate him as an asset? Was the former intelligence officer and his material deemed credible or not? An FBI spokeswoman says, ‘Normally, we don’t talk about whether we are investigating anything.’ But a senior U.S. government official not involved in this case but familiar with the former spy tells Mother Jones that he has been a credible source with a proven record of providing reliable, sensitive, and important information to the US government.

“There’s no way to tell whether the FBI has confirmed or debunked any of the allegations contained in the former spy’s memos. But a Russian intelligence attempt to co-opt or cultivate a presidential candidate would mark an even more serious operation than the hacking.”

Bottom line: Trump has clearly been interested for years in developing whatever revenue streams he can (via Paul Manafort‘s connections or whomever) to prop up his sprawling but less-than-robust financial empire. From a purely practical point of view it would be derelict for the Putin government not to try and exploit this for all it’s worth and try and influence things in the bargain, not just in terms of hacking and then feeding to Wikileaks (which everyone including the Obama administration believes has totally been proven) but whatever else they can get going. 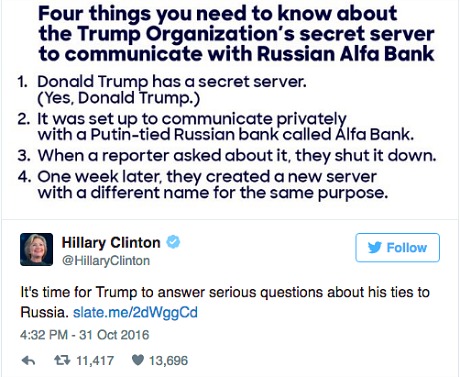 November 1, 2016by Jeffrey Wells58 Comments
« Previous post
Okay, Moonlight, You’ve Had Your Time In The Sun…
Next post »
Triple Cross