Yesterday When I Was Young

In a just-posted interview with his grandson Dylan, Robert Redford has said he’ll more or less retire after finishing what he says will be his final two films — Our Souls at Night, a love story for older people who get a second chance in life, costarring himself and Jane Fonda, and Old Man with a Gun, “a lighter piece” with himself, Casey Affleck and Sissy Spacek.

The reason I’ve said “more or less retire” is that Redford said he’s thinking of going back to sketching and directing “and not acting so much.” The words “so much” indicate a degree of flexibility. 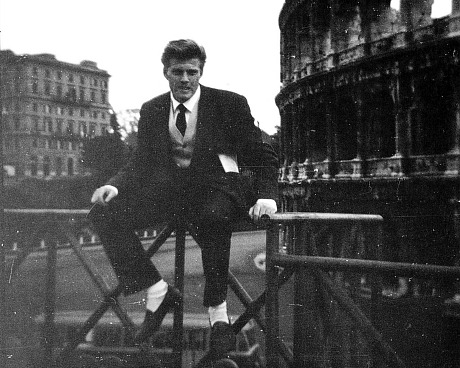 Robert Redford in Rome sometime around 1957 or thereabouts, or possibly in ’56.

“I’m getting tired of acting,” he told his grandson. “I’m an impatient person, so it’s hard for me to sit around and do take after take after take. At this point in my life, age 80, it’d give me more satisfaction because I’m not dependent on anybody. It’s just me, just the way it used to be, and so going back to sketching — that’s sort of where my head is right now. So I’m thinking of moving in that direction and not acting so much. Once [the two films are] done I’m going to say, ‘Okay, that’s goodbye to all that’ and then just focus on directing.”

During the q & a Redford tells Dylan about sleeping one night on the beach in Cannes when he was hitchhiking between Paris and Florence in ’57 or thereabouts, and at one point looking up at the “Carlisle” hotel and wondering what it would be liked to stay there and drink champagne, etc. I posted the following in the comment thread: “Yo, Dylan — are you and your grandad sure that hotel in Cannes was called the ‘Carlisle’? There’s no record of a ‘Carlisle’ hotel in Cannes, nor one spelled ‘Carlyle’ like the famous hotel in NYC. Are you sure your grandad wasn’t referring to the Hotel Carlton? You might want to double-check.”

The q & a includes a photo of Redford in Rome around this time, and I have to say he looks awfully dapper and well dressed for a guy supposedly on the bum who’s trying to be a painter or sketch artist. Put it this way: If I was making a short film about a young guy in Redford’s position during a visit to Rome, I would make certain he wouldn’t wear a white shirt and tie and that he looks a little bit scruffy — T-shirt, three-day beard, Army surplus jacket, etc.

November 11, 2016by Jeffrey Wells6 Comments
« Previous post
Ten Weeks From Now, The Mother of Anti-Trump Protests
Next post »
Walter Chalmers Has Slipped Beneath The Waves