Walter Chalmers Has Slipped Beneath The Waves

What a sad irony that Robert Vaughn, an ardent lifelong liberal Democrat, has died with the knowledge that Orange Hitler will move into the White House on 1.20.17. Perhaps last Tuesday’s election hastened his end, and perhaps not. But if I’d been in Robert Vaughn‘s slippers and ill and near the end, I would have probably said “oh, my God, this is ludicrous…I’m outta here.”

Vaughn was 83, and if you ask me his strongest performance was conniving San Francisco politician Walter Chalmers in Peter Yates‘ Bullitt (’68) — the bane of Steve McQueen‘s existence. In the annals of movie villains, all hail the sinister, calculating, rodent-like Walter Chalmers!

He also played David Blackman, a fetishy studio-boss character who liked to wear bras and garter belts during sex, in Blake Edwards‘ S.O.B. (’81). Every character in S.O.B. was allegedly based on a real person to some degree, and I’m told that Blackman was allegedly based on Johnny Carson, or more particularly an observation passed along by Morgan Fairchild (who was Carson’s lover in ’80 or thereabouts) that Carson enjoyed this, etc. Yes, it sounds ludicrous, grain of salt, etc.

The Wiki page says Vaughn played two roles in Cecil B. DeMille‘s The Ten Commandments — a Hebrew golden calf paganist and an Egyptian charioteer (i.e., he allegedly stood right behind Yul Brynner‘s Ramses in the campaign against Moses’ flock). Three…actually four years later he was nominated for a Best Supporting Actor Oscar as a drunken, self-destructive scion in The Young Philadelphians (’59). He also played the most neurotic of the gunmen in The Magnificent Seven (’60).

Yes, Vaughn’s biggest, splashiest role was Napoleon Solo in the original ’60s series The Man from U.N.C.L.E.. He also played Harry Rule in The Protectors, a ’70s TV series that I never saw or cared about in the slightest, and then General Hunt Stockwell in the 5th season of The A-Team — ditto. He also has a six-year, 48-episode run (’04 to ’12) on the British TV series Hustle, and in’12 appeared in a British soap called Coronation Street.

I used to work for a New Canaan landscaping outfit in the mid ’70s, and the boss, Big John Calitri, used to subconsciously mutter pop labels and phrases as a kind of work mantra. One of his favorites was “Molson’s Golden Ale.” We’d be lugging bags of fertilizer and wood chips or planting balled saplings, and between exhausted grunts Big John would say “Molson’s Golden Ale.” Then his son started to do it, and of his favorites was “Walter Chalmers.” It became a running joke between he, myself and one other guy on the crew. Whenever we were especially tired or facing an especially hard task, someone would say “Walter Chalmers.” 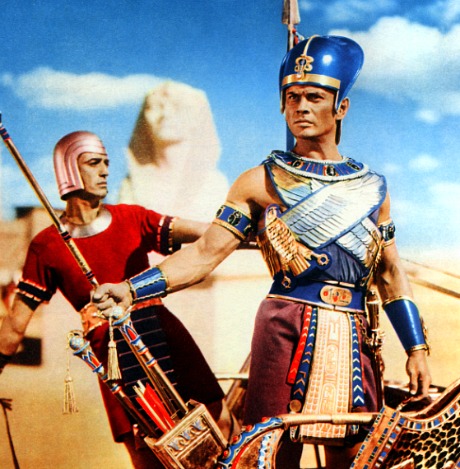 I’m not certain this is Robert Vaughn in the chariot behind Yul Brynner in The Ten Commandments, but…well, it might be.

November 11, 2016by Jeffrey Wells15 Comments
« Previous post
Yesterday When I Was Young
Next post »
“If You Don’t Become The Ocean, You’ll Be Seasick Every Day”