My understanding, to cut to the chase, is that you disciplined the wrong guy.  The idea of OscarsSoWhite being “cancelled”, as represented by the headline and the rewritten lede, was the work of Sneider’s editor Josh Dickey. Dickey decided to emphasize the “cancelled” thing when he edited Sneider’s initial copy, which hadn’t raised the OscarsSoWhite angle until the third or fourth paragraph. 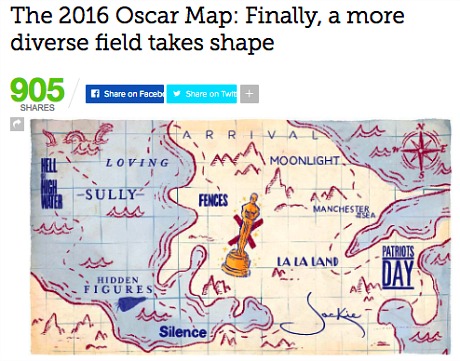 I also understand that Sneider was whacked last Thursday morning without so much as a discussion or a review of the situation.  New York-based management was pissed and scared and wanted the problem ended. Dickey wanted to discuss the decision to run an inflammatory headline (which he immediately recognized as a mistake), but he wasn’t allowed to get into it. Repeating — the inflammatory headline and lede were totally Dickey’s idea, and yet you threw Sneider under the bus, more or less because Jeff was relatively new to the team (he was hired last August) and because Josh has three kids at home.

I gather that the decision to fire Sneider was primarily over his tweets in response to the “OscarsSoWhite is cancelled” story, which went up last Wednesday afternoon.  But again, this was on Dickey. With the Twitter dogs fuming last Wednesday evening, Sneider asked Dickey to review his tweets with an offer to delete any which seemed too tart or adversarial, and he was told they hadn’t crossed the line and were not a problem as far as Dickey could see. (Dickey soon after copped to the mistake on Twitter and Facebook.)

Sneider had merely disputed the judgment of Twitter hounds who were after his head because of Dickey’s edit. He didn’t use hostile or perjorative terms in his tweets, and yet he was firm and non-apologetic.  It was apparently decided that Sneider should have been apologetic in a groveling sort of way. Mashable’s New York management wanted the issue to be immediately erased, and arguing would only prolong it.

All Sneider essentially said in that story, even with Dickey’s clickbait re-edit, was the exact same thing that Indiewire‘s Anne Thompson wrote on 9.26 with a story that was headlined “RIP #OscarsSoWhite:  Why 2017 Will Be The Most Diverse Awards Season In Decades.”  The same observation published several weeks earlier with “RIP” used instead of “cancelled.”

On Friday, 12.2, or the day after Sneider was canned, Deadline‘s Pete Hammond wrote a story called “Is OscarsSoWhite Sooo Last Year?”  It quoted AAFCA president Gil Robertson saying that “the coming award nominations are going to definitely put a pause on #OscarsSoWhite this year, but we wonder for how long.” Again — same conclusion, slightly different terminology

What is the precise difference between the use of “RIP” (i.e., dead) and “cancelled”?  They seem to mean pretty much the same thing to me, but Thompson’s 9.26 piece didn’t elicit so much as a peep from the Twitter dogs while Sneider’s (or more accurately Dickey’s) headline and lede resulted in a tough, attuned and highly respected industry reporter (who has, yes, a rep of being hot-headed) getting whacked like Joe Pesci in Goodfellas. 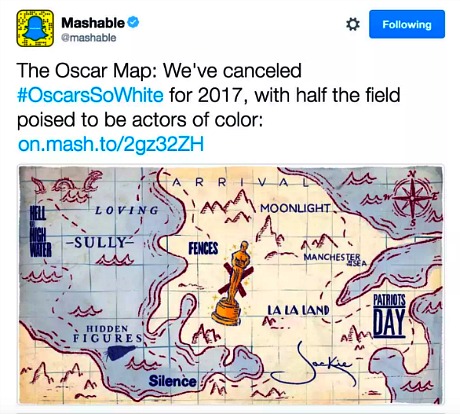 Mashable’s social transgression, in short, was using the term “cancelled” instead of “on pause.”  Had Dickey decided on the latter instead of the former, Sneider would be working for Mashable right now and all would be hunky-dory.  But you guys couldn’t stand the heat and so you acted hysterically and deep-sixed a good reporter because of something his editor did.

You guys got scared. You were concerned about being painted with a bad brush. Twitter, you had decided, was on the verge of deciding that the word Mashable was synonymous with the embracing of smug, dismissive attitudes about institutional racism, and so you quickly killed the guy who was perceived to be at the root of this image problem.

You could’ve manned up, looked into the particulars, apologized but at the same time protected the reporter. But you went the scared-rabbit route and cut Sneider loose.

Publishers with a semblance of backbone know that while you have to be flexible and open to acknowledging mistakes and if necessary apologizing for them, you never kowtow to Twitter dogs.  Twitter is a hotbed of daily, shoot-from-the-hip outrage and hysteria.  It’s a demon pit.  Look at that idiotic, very recent Last Tango in Paris thing by angry, misinformed, hair-trigger actresses (i.e., Jessica Chastain) and various five-alarm types.

By the same token Owen Gleiberman should have been whacked over that Rene Zellweger riff about how she and more particularly Bridget Jones looked different due to facial surgery, but Variety just dug in, stood by their man and rode it out.

And guess what?  OscarsSoWhite has been more or less cancelled, at least for the time being and certainly in a moving-train symbolic sense, as this year’s nominees are clearly more ethnic (i.e., blacker, browner, more Asian) and varied in terms of the finalists than the year before.

This plus the institutional changes brought about by the Academy last January in terms of diminishing the influence of at least a portion of the old-fart contingent translates into serious, noticeable change compared to the attitudes that triggered OscarsSoWhite in the first place.

Am I missing something?  If what I’ve described is more or less what happened then this is really and truly an act of editorial cowardice on your part, and beyond disgusting.  But maybe I’m missing something. If I am, please fill me in.