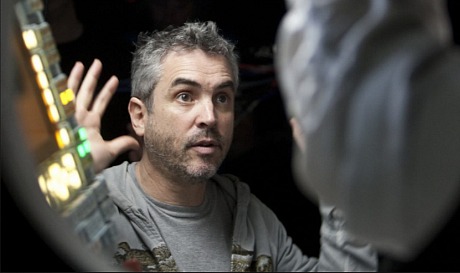 Alfonso Cuaron during the Mexico City-shooting of Roma.

Alexander Payne‘s Downsizing (Paramount, 12.22), a sci-fi comedy about “a couple that has agreed to have themselves shrunk down, except the wife changes her mind after the husband submits to the process.” Matt Damon, Kristen Wiig, Christoph Waltz, Alec Baldwin, Neil Patrick Harris, Jason Sudeikis.

Paul Thomas Anderson Anderson’s ‘s semi-fictionalized biopic about legendary egomaniacal fashion designer Charles James (1906-1978) with Daniel Day Lewis in the lead role. Deadline‘s Mike Fleming reported on 9.8.16 that the film will be set in the fashion world in London in the 1950s (even though James operated out of New York City during that decade). Fleming also said that Focus Features plans to release it in late 2017.

Alfonso Cuaron‘s Roma, a Spanish-language drama which began filming a few weeks ago. Boilerplate: “A year in the life of a middle-class family in Mexico City in the early 1970s.” Will probably be consigned to Foreign Language Feature competition, but it’s a Cuaron film with Emmanuel Lubezki handling the cinematography, but I’m including in the likely Best Picture category because of Cuaron’s stellar reputation.

Pick of the Litter, Brand-Name Directors, Made For Intelligent, Review-Reading, Over-35 Types (23)

Olivier Assayas‘ Personal Shopper w/ Kristen Stewart (IFC Films, 3.10.17). After stirring the pot and lighting the match at the 2016 Cannes Film Festival and then playing at the Toronto and New York film festivals, Assayas’ brilliant ghost film was put on the shelf by U.S. distributor IFC Films with a plan of opening it on 3.10, along the path of Clouds of Sils Maria.

Steven Spielberg‘s The Kidnapping of Edgardo Montara, allegedly intended to be a 2017 release. Spielberg is apparently directing a Tony Kushner screenplay, based on David I. Kertzer’s 1998 novel with Oscar Isaac, Mark Rylance. But don’t quote me.

John Curran‘s Chappaquiddick, the indie drama based on the July 1969 tragedy that stopped Ted Kennedy‘s Presidential ambitions cold when a young campaign worker, Mary Jo Kopechne, was drowned in an overturned car that Kennedy was driving. Based on a Blacklist script by Taylor Allen and Andrew Logan. Costarring Jason Clarke, Kate Mara, Ed Helms. Here’s an 8.8.16 HE piece about the script.

Richard Linklater‘s Last Flag Flying, a kind of long-throw, post-9/11 sequel to Hal Ashby‘s The Last Detail (’73). Based on Daryl Poniscsan’s 2005 novel, it focuses on a reunion between Badass Buddusky, Mule and Meadows, who were played in Ashby’s film by Jack Nicholson, Otis Young (who died in ’01) and Randy Quaid. It stars Bryan Cranston, Steve Carell, Laurence Fishburne and J. Quinton Johnson.

David Gordon Green‘s Stronger (Summit), the “other” Boston marathon bombing film, this one about Jeff Bauman (Jake Gyllenhaal), a guy who lost his legs due to the bombing and had to adjust to leg prosthetics along with other issues. Written by John Pollono, based on the book of the same name by Jeff Bauman and Bret Witter. Costarring Tatiana Maslany, Miranda Richardson and Clancy Brown.

Dan Gilroy‘s Inner City. Boilerplate: “Michael Clayton meets The Verdict. Denzel Washington plays a hard-nosed liberal Los Angeles lawyer. When the firm’s front man has a heart attack, Denzel assumes his responsibilities. He finds out some unsettling things about what the crusading law firm as done regarding the poor and dispossessed, and finds himself in existential crisis that leads to extreme action.”

Jacques Audiard‘s The Sisters Brothers. Cast: Joaquin Phoenix, John C. Reilly. Boilerplate: “Based on Patrick DeWitt‘s novel, The Sisters Brothers revolves around the colorfully named gold prospector Hermann Kermit Warm (Phoenix), who’s being pursued across 1000 miles of 1850s Oregon desert to San Francisco by the notorious assassins Eli and Charlie Sisters. Except Eli is having a personal crisis and beginning to doubt the longevity of his chosen career, and Hermann might have a better offer.”

Abdellatif Kechiche‘s Mektoub Is Mektoub. Boilerplate: “Amin, a young screenwriter goes to his Mediterranean home town for a summer vacation where he falls in love with Jasmine, and meets a producer who agrees to finance his first film. But when the producers wife shows interest in Amin, leaving him to decide between her, Jasmine and his career.” (Everyone remembers, of course, that Kechiche directed Blue Is The Warmest Color.)

Hany Abu Assad‘s The Mountain Between Us (20th Century Fox, 10.20.17) — Survivalist drama with romantic undercurrent, based on Charles Martin’s same titled novel with a screenplay by Chris Weitz (who reportedly rewrote drafts by J. Mills Goodloe and Scott Frank. A surgeon (Idris Elba) and a writer (Kate Winslet) stranded in sub-zero weather in the mountains of northeastern Utah after a plane crash.

Roman Polanski‘s Based On A True Story, an adaptation of Delphine de Vigan’s novel of the same name with a screenplay adaptation by Olivier Assayas. About a writer (Emmanuelle Seigner) whose life and mind are endangered by an obsessive woman (Eva Green).

Alex Garland‘s Annihilation, a sci-fi thing based on Jeff VanderMeer‘s book of the same name. The husband of a biologist (Natalie Portman) disappears, and is sought after in an environmental disaster zone. Costarring Jennifer Jason Leigh and Gina Rodriguez.

Untitled Marital Dissolution Drama by Leviathan director Andrey Zvyagintsev. Pic was reported as expected to begin filming in ’16; should be ready for release in ’17.

Brady Corbet‘s Vox Lux, which follows the important cultural changes of the last 15 years through the eyes of pop star Celeste (Rooney Mara). Pic will be shot in 65mm and shown in 70mm, which, due respect, means nothing these days with 6K and 8K formats increasingly available.

Oren Moverman‘s The Dinner (The Orchard, 5.5.17) — In September 2013 it was annnounced that Cate Blanchett would direct this adaptation of Herman Koch‘s “The Dinner” — it was announced in January ’16 that Moverman would take over. Richard Gere and Steve Coogan playing brothers whose children have committed a serious crime. Costarring Laura Linney, Rebecca Hall and Chloë Sevigny. Premiering at the 2017 Berlinale.

Arnaud Desplechin‘s Ismael’s Ghosts (Magnolia) — Drama costarring Mathieu Amalric, Marion Cotillard, Charlotte Gainsbourg and Louis Garrel. About “a filmmaker whose life is sent into a tailspin by the return of a former lover just as he is about to star shooting a new film,” etc.

Luca Guadagnino‘s Call Me By Your Name, a gay relationship drama, based on same-titled 2007 novel by Andre Aciman. Pic was allegedly inspired in part by Maurice Pialat‘s A Nos Amours. Costarring Timothee Chalamet, Armie Hammer and Michael Stuhlbarg. One of the big attractions of Sundance 2017.

Andrew Dosunmu‘s Where Is Kyra? — Costarring Michelle Pfeiffer and Keifer Suitherland. Directed by Dosunmu; co-written by Dosunmu and Darci Picoult. Set to premiere at the 2017 Sundance Film Festival on 1.23.17.