Who gets into fights with cab drivers? I’ve had some mild disagreements with drivers from time to time, but the only time I’ve really argued with one was in Toronto two or three years ago, and that was because I had my GPS bearings and he was driving without a clue — no sense of instinct or direction or anything. He was an idiot. But nobody argues with a cab driver if they can help it, and getting into a physical fight with one sounds fairly ridiculous. And yet I feel a measure of empathy for Silicon Valley and Office Christmas Party star T.J. Miller, who was arrested last night after taking a poke at a Los Angeles cabbie. A Hollywood Reporter story says that Miller got physical “over a political argument involving Donald Trump.” I get it, man. You’ve persuaded a portion of the entertainment community that you’re an immature, hair-trigger type, but I understand. I would dearly love to bitch-slap a Trump supporter, and I haven’t clobbered anyone since I was 13. 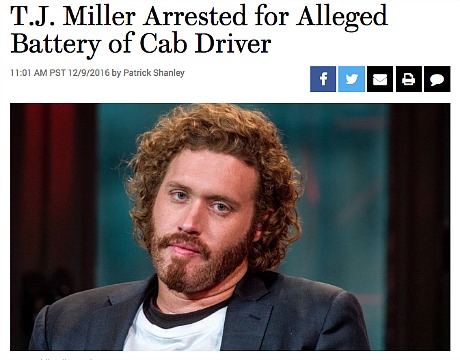