In an 8.12 EW piece about Morten Tyldum‘s Passengers, Sara Vilkmmerson wrote that Jennifer Lawrence and Chris Pratt, travelling on a luxury interstellar spaceship bound for the Homestead II colony 120 years away, are “two out of 5,000 souls traveling in suspended animation before they’re mistakenly awakened 90 years too early.”

Having heard from a Sony rep and confirmed that a version of Jon Spaihts‘ script that I read last summer more or less represents the finished film, I can say that Vilkmmerson’s synopsis is somewhat inaccurate. 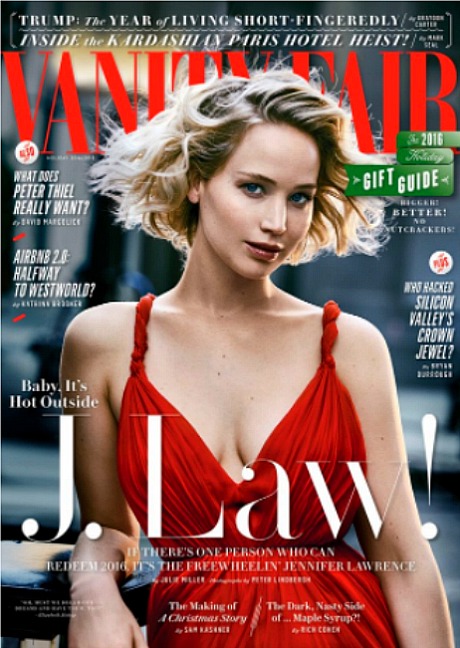 In a new Vanity Fair cover story on Lawrence, author Julie Miller repeats the same vaguely misleading information, to wit: “Due to a mechanical malfunction, both characters wake up about 30 years into the 120-year voyage and struggle to survive while hurtling through space.”

The trailers have long made the “woke” part clear, but there’s more to Passengers than this. It won’t be cool to talk about it for a few weeks yet, at least until January sometime and even then spoiler whiners will hit the roof. But when the time is right, a discussion will be had.

In the same piece, however, Miller describes Darren Aronofsky’s Mother as “a home-invasion horror movie.” Until today “horror” has never been part of any description of this Montreal-shot film, which costars Lawrence, Michelle Pfeiffer, Domnhall Gleeson, Ed Harris and Javier Bardem. I should add that roughly a month ago I was told by Aronofsky that “the [Mother] title has not been reported correctly…that’s all I gotta say about that.”

Lawrence tells Miller that “she’d been wanting to work with the Black Swan filmmaker, so when he pitched her the project, still without a script, she immediately accepted.” Lawrence calls Aronofsky “a visionary,” which most of us have already acknowledged, I think. Miller doesn’t touch the “Lawnofsky” thing, and that’s fine.

Morten Tyldum said the following to Vilkomerson about Passengers: “Every generation has its love story. I feel like this is it. And [making it was] exhausting. It’s big emotions, it’s desperation, it’s love, it’s happiness, it’s fear, it’s anger. You will laugh and cry and hold your breath and be at the edge of your seat. It has chills. It also will make you smile and laugh a lot. We wanted a playful movie.”