There are two aspects of Garth Edwards and Tony Gilroy‘s Rogue One (Disney, 12.16) that I was really and truly impressed by, and I can’t mention either of them. Well, I could but it would be shitty of me. The first weekend crowd is entitled to be surprised as much as I was last night. As far as overall reactions are concerned, I’m going to summarize the basics and mix in some iPhone jottings that I tapped out last night at Mel’s Diner on the Strip, and then blend in comments from four seasoned know-it-alls who also caught it yesterday.

My basic reaction is “okay…if that’s how you want to play it, fine….I’m sure it’ll make a lot of dough. The question is ‘how much?'” My second reaction is “boy, I wonder what this thing was before Tony Gilroy came along and rewrote 40% of it and punched it all up.”

I came, I saw, I wilted and I sure as shit didn’t “care” that much. I wasn’t actually indifferent but I was saying to myself “I’m not into this” almost immediately. But I didn’t mind it, as such. Then I started to get into it toward the end, but emotional engagement definitely hadn’t happened. But Rogue One does play right into A New Hope — it all feeds in and craftily at that, and this I found satisfying.

Remember those secret Death Star plans that Princess Leia put into R2D2, plans that she wanted Obi Wan Kenobi to have, etc.? That’s what Rogue One is basically about — how the rebels got hold of those plans and figured out the basic structural weakness of the Death Star (i.e., “the weapon”). And don’t scream “spoiler” at me — this summary is right there on the Wiki page.

I was highly impressed, as noted, by at least two secret respects, but among the plus-elements I’m able to mention the huge extended battle scene (which seems to go on for at least 25 or 30 minutes and possibly a bit longer) is simultaneously dazzling and exhausting.

We also have the usual assortment of malevolent Empire officers (love those tunics!) including Ben Mendehlson‘s Orson Krennic (one of the few Mendehslon bad guys who doesn’t sweat or smoke cigarettes), a slightly different Darth Vader (same bulky size and outfit and yes, speaking with James Earl Jones‘ electronically modified voice, but somehow not sounding as deep or forceful as he did in the original trilogy), and a character I can’t mention.

My first reaction, tapped out around 10 pm: “A crowd pleaser! But what kind of crowd would that be? I didn’t care but I was ‘impressed.’ Very appealing linkage with A New Hope. The action and strategies are so fast and furious and complex that I gave up after a while. I didn’t ‘care’ but I didn’t mind it, if you catch my drift. At times I felt as if there were bees in my head. I knew what the basic template would be.had to be, and so I just settled into that. Not wonderful but good enough. Familiar but different…zzzzz.

“Nice pumped-up extended battle finale, shot in the Maldives. In that Edwards and Gilroy have made a ‘war film’ (Edwards’ oft-repeated description), they’ve certainly embraced the brutal conditions and results of war, and they aren’t afraid of finality.” 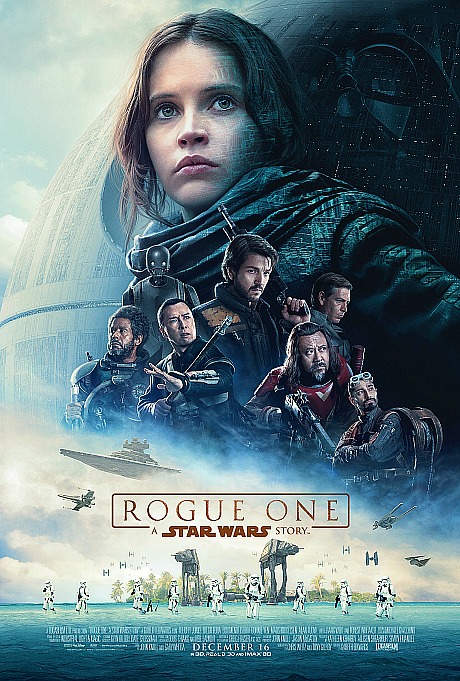 From a Munich journalist friend…

“That Rogue One was one boring and uninvolving slog of a movie. Not a single thing I found interesting or memorable. It didn’t make me think of anything other than the sinking feeling that being 133 minutes, it would not end for a while. It just goes on and on, being directed with such a heavy hand that you felt pushed back into the chair.

“I had seen Silence a few hours before, and that felt much shorter, livelier and more exciting in every single frame. Just saying.”

From a producer friend who saw it with me, tapped out as she spoke and forwarded to a director friend:

“Not enough of a story, she said. Stabs at character and emotion, but not enough. Didn’t stick it in a way that felt character-rich or sufficiently emotional. Way too spotty and plotty and hyper logistical…too many characters, too many locations, rush rush rush around. She said there just wasn’t enough oxygen. Not enough human feeling.

“She talked to five or six people on the Disney lot after it was over, one in the bathroom, some in the parking lot, all in their late 30s and 40s, and they all said ‘Nope, not for us, too fast and scrambled, doesn’t sink in.'”

Hollywood Elsewhere again, writing to myself at Mel’s and addressed to the world: I didn’t expect to “care” that much, and the film doesn’t disappoint in that sense. I saw it for what it was, processed it for what it is. I’m sensing that Disney CEO Bob Iger, who is nothing if not practical-minded, is a kind of mega-efficient, gray-haired droid executive, at least as far as not injecting the emotional-narrative heart element is concerned.

It’s a crazy, frantic, bang-bang, forward-propulsion machine, this thing. God knows what it was before Gilroy stepped in and fixed it.

Kids today don’t want character and emotion to any great degree. They want PS4/X-Box action. They want overload. They want faster than before, more than the last one. They want the same framework and the same stuff, in a sense, but they don’t want “I love you” / “I know.” Not any more, not really.

But by the ethos of 2016 and the fuel-injected Iger priorities and determinations it was made by, Rogue One is a reasonably lively, obviously pricey and in some ways satisfying thing. (Certainly in those two ways that I mentioned at the start of this review, but which I can’t describe.)

A New York guy is calling it “Snooze Wars” as “it didn’t play in the room like it did last year with The Force Awakens.” He saw it in the same AMC Loews Lincoln Square theater that JJ Abrams film played in a year ago, but there was “hardly any cheering or clapping this time around.” He adds that “the most surprising thing for me is that as a stand-alone Star Wars movie, you really have to be a fan to understand and appreciate how all the pieces fall together. Overall a B-minus.”

I can at least allude to one of the above-mentioned secrets by saying it’s great how state-of-the-art technology has allowed us to commune once again with the spirit of H.P. Lovecraft and Dr. Herbert West.

I wrote a piece for Empire back in ’91 or ’92 called “Reanimator,” about how then-approaching digital technology would allow filmmakers to bring dead actors back to life. One early example was the notorious Fred Astaire Dirt Devil commercial. I remember a quote I got from an FX guy who said “it’s all very exciting and visionary, I suppose, to talk about bringing Cary Grant and other stars of his realm back to life on the screen, but they’re dead, for God’s sake.”