The Snobs Hated Them At First

If you really value movie craft in all its guises, you can celebrate George Roy Hill‘s The Sting as much as Martin Scorsese‘s Silence, Samuel Fuller‘s Forty Guns, Robert Bresson‘s Au Hasard Balthazar, Barry Jenkins‘ Moonlight or Asghar Farhadi‘s The Salesman. A great film is a great film.

The snobs will never admit this in certain cases, of course. That’s the cave they live in. They hate movies that feel good. Today’s assignment: Name some really good films that the snooties have always spat upon, or at least that were critically loathed when they first opened only to be given their critical due years later. But no comic-book CG superhero films. 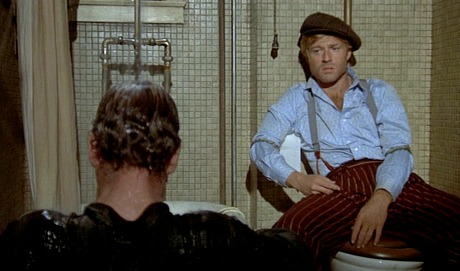 A little over four years ago I ran a piece about The Sting. It was basically an answer to a question that Pauline Kael posed 43 years ago: “What is this movie about anyway?” Answer: Emotional comfort in the form of assured professional craft. It’s about conning people into caring about a shallow story with no themes or subcurrents whatsoever. It’s about keeping them intrigued even though the good-guy con artists have the upper hand all the way.

I once called the Chicago Limited poker-game scene “the most satisfyingly shot and performed scene of its type in Hollywood history because it’s not about poker, but about two cheats trying to out-fuck each other. Paul Newman‘s smug and rascally confidence is key, but the whole thing really depends upon Robert Shaw‘s seething rage — the scene wouldn’t play without it. It’s all about boiling blood.