Support on Patreon Follow @wellshwood
9 Comments
Up With STEP Sisters

Time constraints caused by schedule overlap kept me from seeing all of Amanda Lipitz‘s STEP last night (I caught 55 minutes’ worth), but I saw enough to absorb the basic scheme and appreciate that despite a slightly raggedy approach it’s a spunky, engaging, “we’re black and proud and headed for college if we can earn good enough grades and somehow manage the financial aspect” thing. It’s about hard work, high hopes, heart, family, ups and downs, etc. 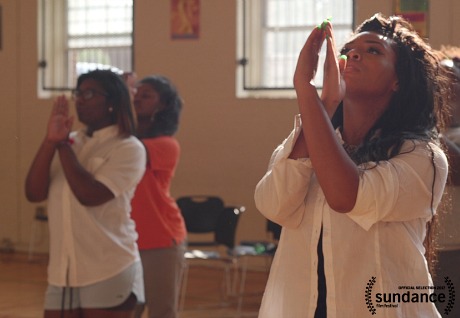 We’re all familiar with docs and narratives about high-school strivers. The best of them are rough and real but also comforting and inspiring. We can do this if we really believe in ourselves and work our asses off and if fate or God smile, etc. STEP feels like one of the better ones. It ends, of course, with a competitive performance finale, the outcome of which gives you a nice “fuck yeah!” feeling. (Or so I was told by a guy who saw the whole thing.)

Shot in late 2015 (or a few months after the Baltimore unrest sparked by the death of Freddie Gray), the doc focuses on three senior girls at the Baltimore Leadership School for Young Women who are members of the stepdance team, and are known as the “Lethal Ladies of BLSYW.”

The most magnetic of the three is Blessin Giraldo, a spirited looker who’s looking to attend college away from Baltimore, where she’s seen some tough times both at home (her mother suffers from depression) and elsewhere, except she’s having scholastic difficulties and is therefore putting her future in some jeopardy.

The second most interesting is the brilliant Cori Grainger, a shy, cautious type hoping to attend Johns Hopkins University on a full scholarship. Bringing up the rear is Tayla Solomon, whose single mom is a corrections officer. Like Blessin, Tayla also isn’t earning high-enough grades, at least at one point in the saga.

Last night I caught my last two films of the 2017 Sundance Film festival– Amanda Lipitz‘s STEP, a rousing, affecting doc (recently acquired by Fox Searchlight) about getting out and over for a trio of inner-city Baltimore girls whose involvement in a Baltimore Leadership School for Young Women step dance team is fused with their attempts to gain admission to a good college, and Ted Bourne, Mary Robertson and Banks Tarver’s TRUMPED: Inside The Greatest Political Upset Of All Time. I’ve been working on reviews of both, but I’ll have to finish them (or try to) at Salt Lake City’s airport. My Park City Transportation shuttle arrives in 25 minutes.

In his Variety obit for the late John Hurt, Owen Gleiberman notes that Hurt’s extraordinary range always involved empathy for this characters, a prime example being “his mordant undertone of regret” as the professional killer in Stephen Frears’ The Hit (1984).

The character was called Braddock, and Hurt’s portrayal of this flinty fellow was a kind of game, in a sense. All through the film he did the standard taciturn and frosty thing, the proverbial ice-man, a void in his soul. And yet Braddock was almost entirely driven by emotion. The trick was to convey occasional spigots of the stuff beneath the tough-guy facade.

Braddock was cold, clipped, hard-boiled. Strictly a professional, always guarded, always with the shades. But Hurt’s task in The Hit was to secrete little flickers of feeling, little hints of alone-ness and black humor or existential fear, and — during the third act — to convey hints of buried camaraderie and even compassion for Terrence Stamp‘s Willie Parker.

The fact that Braddock had a thing for Laura del Sol‘s Maggie wasn’t so much conveyed by Peter Prince‘s script but by Hurt’s extraordinary finesse. You eventually get the idea that Del Sol might be the great love of Braddock’s life.

Bill Maher is obviously 100% dead-on, but the ugly fact is that in today’s Twitterverse, a realm of politically correct wild dogs looking to rip your flesh and consume your intestines over the slightest hint of an infraction…the ugly fact is that daily columnists like myself have to occasionally walk stuff back. Not with some whiny-ass “apology” but a straight, subdued admission along the lines of “okay, maybe I could’ve phrased that with a little more sensitivity.” You have to at least be open to an occasional admission of this or that shortcoming, first and foremost because I make little mistakes all the time. Nickle-and-dime missteps of phrasing, slight errors of judgment, etc. The trick is to catch them on my own or, depending on the situation, admit error when called out. If, that is, I’m actually in the wrong, and that’s a big “if” so watch it.

Key quote: “While you self-involved fools were policing the language at the Kids’ Choice Awards, a madman talked his way into the White House.”