Let me explain something to The Hollywood Reporter‘s Scott Feinberg, who moderated last night’s Santa Barbara Film Festival tribute to Hell or High Water‘s Jeff Bridges, as well as the person who edited the Bridges film-clip montage that started the evening off. Feinberg knows film history better than most and can rattle off statistics like a machine, but surely he’s modest enough to appreciate that he doesn’t know everything and that lessons and reminders are good things to absorb.

Bridges’ most robust career phase was a 13-year stretch between Peter Bogdanovich‘s The Last Picture Show (’71) and Hal Ashby‘s 8 Million Ways To Die (’84). These were the super-quality years — the rest of his career enjoyed an occasional highlight (’98’s The Big Lewbowski, ’09’s Crazy Heart, etc.) but yard by yard and dollars to donuts, the ’70s and early ’80s delivered the most bountiful hey-hey. 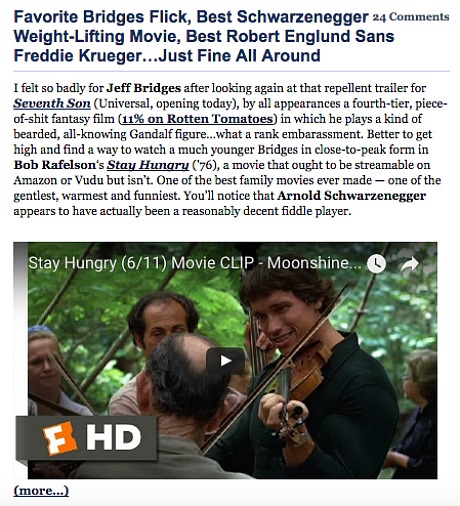 If you ask me Hero and Hungry are the most exciting and infectious, and that means you don’t omit them from any Bridges career montage or from any Bridges interview. I don’t care how many fans would rather hear about fucking King Kong or the eternally leaden and indulgent Heaven’s Gate — you DON’T blow off The Last American Hero (which Bridges himself mentioned but which Feinberg apparently hasn’t seen), Rancho Deluxe (ditto) or Stay Hungry.

To the doghouse with both of them (i.e., Feinberg and the editor)! A 24-hour diet of dog biscuits and tap water.

During the interview Bridges was forgetting titles and names left and right. He couldn’t remember Against All Odds (only that it was a remake of Out of The Past) so I shouted it out from the audience. Then he forgot the name of Rancho Deluxe costar Richard Bright and I shouted out another reminder. “Who?” Bridges said. “Richard Bright!” I shouted. Bridges had mentioned that Bright had been in both Godfather films (which is true — he played Al Neri) but he seemed unsure about Bright’s participation in Rancho Deluxe. 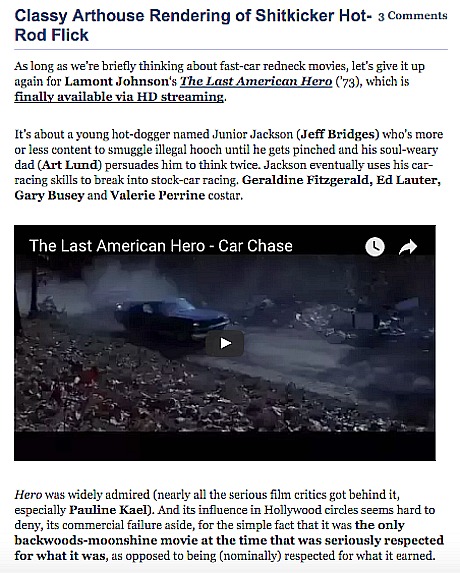