The all-new Kong in Jordan Vogt-Roberts‘ Kong: Skull Island (Warner Bros., 3.10) is big and loud and a serious brawler, and he beats his chest and roars like a sonuvabitch. But apart from instinctually defending his turf and fighting off Army choppers and bad-attitude lizards, he’s temperamentally closer to the lovable, human-friendly Son of Kong ape than any of the other manifestations.

Remember the “poor Kong, we love you!” declarations by Jessica Lange and Jeff Bridges in the catastrophic ’76 version? Similar sentiments are heard from Brie Larson and Tom Hiddleston here, only with the acting more toned down and the dialogue less on-the-nose. 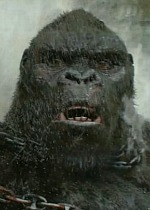 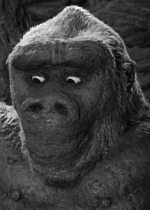 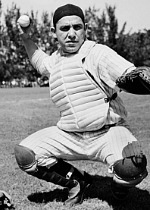 On top of which the new Kong is Skull Island’s Marshall Dillon — he’s more into keeping order than domination, beats the shit out of needlessly aggressive beasts, helps a trapped super buffalo and is fundamentally a decent, compassionate simian when it comes to humans.

Unless, that is, the human in question is Samuel L. Jackson‘s gung-ho, itchin-for-a-fight military commander — the all-time King of Idiotic Assholes in Hollywood monster movies. In which case the vibes are not good.

On top of which JVR’s beast looks like a short-legged guy in a bearskin ape suit blown up to a height of 120 feet or so. He more or less resembles Yogi Berra, certainly in terms of his head-shape and facial features, only with longer arms and bigger shoulders.