Kino Lorber’s Bluray of Alfred Hitchcock’s The Paradine Case (’47) pops on 5.30. Please understand this is a sub-par Hitchcock from his post-Notorious, pre-Strangers on a Train phase, which was largely about treading water. He finally got the old pizazz back with Strangers. Stage Fright and Under Capricorn were also made during this fallow period, which lasted four and 1/2 years, give or take.

I’m tempted anyway, of course. I’ve never seen Paradine in 1080p — only once or twice via standard-def cable. I’ll sit through just about any flush big-studio ’40s film if it looks good enough. Hitchcock’s dp this time was Lee Garmes — Detective Story (’51), The Lusty Men (’52), The Desperate Hours (’55), and Howard Hawks‘ Land of the Pharaohs (’55). 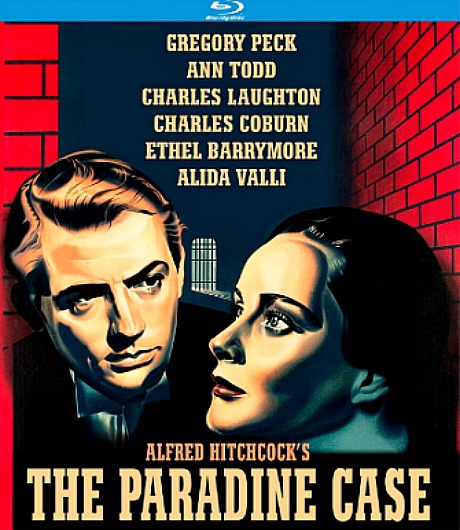 “The Paradine Case is a straightforward portrait of obsession and downfall,” I wrote on 12.16.15. “It’s a carefully measured, decorous, stiff-necked drama about a married, middle-aged attorney (a too-young Gregory Peck) who all but destroys himself when he falls in love with a femme fatale client (Alida Valli) accused of murdering her husband.

“A foolish love affair is one thing, but Peck’s exists entirely in his head as Valli isn’t the least bit interested and in fact is in love with Louis Jordan, whom she was seeing before her husband’s death. Not much of an entry point for a typical moviegoer, and not a lot to savor.

“It’s essentially a romantic triangle piece (Peck, Valli, Jordan) but you can’t identify or even sympathize with Peck as Valli is playing an ice-cold monster. But I’ve always respected the tragic scheme of it. By the second-to-last scene Peck’s humiliation is complete and absolute.”

The only half-interesting film Hitch made during his late ’40s dry spell was Rope (’48), but have you watched it lately? I popped in the Bluray a couple of years ago and couldn’t stay with it. Rope was mainly just a technical exercise piece (all one shot, no cuts), and is certainly worth watching for this aspect alone. But not twice. Every time the reel comes to an end the camera dive-bombs into the backside of somebody’s dark suit.

Rope is a ticking-clock chamber piece about a Leopold & Loeb-type gay couple (John Dahl, Farley Granger) hosting a gathering of New York sophistos in their spacious New York apartment while the body of a young man they’ve just strangled sits inside a large chest at the center of the action. Granger’s acting is very hard to get through — he plays the same note (anxiety, brittle nerves, excitable) all through it. After a while you want to slap him.

James Stewart‘s performance as snooty publisher Rupert Cadell, Dahl and Granger’s philosophical idol, is the only diverting thing about it. Once you’re past the visual scheme, I mean. It’s not so much Stewart’s acting (which is fine) as the fact that he was playing an effete misanthrope — cast against type.