Scott’s Personal Shopper Review Is (a) Not Just The Most Perceptive and Persuasive But (b) One Of The Best-Written Reviews Ever, Period

Olivier Assayas‘ Personal Shopper, HE’s favorite 2017 film hands down, has opened to largely favorable reviews — currently at 77% on both Rotten Tomatoes and Metacritic. A 67% or 71% rating means a modest degree of difficulty, but 77% basically means that a film has been judged as very, very good except for the complaints of naysayers who don’t or can’t get it.

I was blown away in particular by Tony Scott’s beyond-brilliant N.Y. Times review. It’s so on-target and revelatory that I felt spellbound as I read it. Scott doesn’t just understand and accept this immaculate and mesmerizing film; it’s almost as if he wrote or directed it himself and has taken to reviewing to explain it to the pissheads and tomato-throwers. 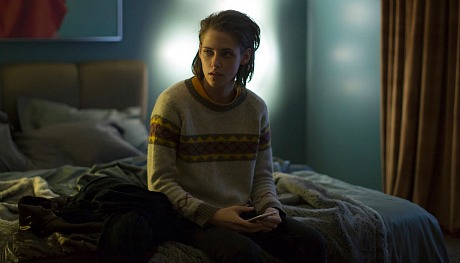 The “perpetually displaced nomad set” amid “the drift and mystery of modern life”…yes!

Read it on the Times site or here in its entirety, but this is about as bull’s-eye as it gets:

“Like many other characters in the films of Olivier Assayas, Maureen, a young American woman living in France, belongs to a relatively privileged slice of the international nomad class. The old-fashioned term ‘jet set,’ with its connotations of glamorous indolence, doesn’t quite fit. Mr. Assayas’s world is populated by figures in perpetual transit: actors, corporate executives, terrorists. Their identities have been dissolved by perpetual displacement. We remember their faces (which are often the faces of movie stars), even if we’re not quite sure who they are.

“Maureen, who works as a personal shopper for a spoiled celebrity named Kyra, certainly brushes up against glamour, and occasionally tries on a piece of Kyra’s borrowed couture. But she dwells mostly in a benumbed, stressed-out limbo, in frenzied motion from one nowhere to the next. Her human connections are often mediated by screens. She video-chats with her boyfriend, a tech consultant on assignment in Oman. She exchanges feverish texts with a stranger on a train from Paris to London and back. When asked what she’s doing in Paris, Maureen answers, ‘I’m waiting.’

“What she’s waiting for is a sign from her twin brother, Lewis, whose recent death partly explains his sister’s dazed, blunted affect. If Personal Shopper, Mr. Assayas’s new movie, is a supernatural thriller and an unnerving inquiry into the drift and mystery of modern life, it is also a raw and smoldering study in grief.

“Kristen Stewart, who plays Maureen, has something in common with other stars of Mr. Assayas’s films, notably Maggie Cheung in Irma Vep and Clean — a quality of self-enclosed detachment that becomes its own peculiar form of intensity. She possesses an uncanny ability to turn her natural charisma into diffidence. You can’t take your eyes off her, even as she seems to be making every effort to deflect your attention, to obscure her radiance, to disappear onscreen.

“In Clouds of Sils Maria, Mr. Assayas’s previous film, Ms. Stewart’s character, another celebrity assistant, did vanish. You might say she ghosted. This time she summons ghosts, thanks to a plot contrivance that makes the most of Ms. Stewart’s elusive magnetism. Maureen’s lost brother is not the only one: Other ectoplasmic apparitions make themselves known, and without quite preparing you for it, Personal Shopper becomes a sneakily effective horror film, complete with a gruesome murder and Hitchcockian flourishes of menace and misdirection.

“Some viewers may balk at Mr. Assayas’s supernatural literalism. Surely he’s too subtle and cerebral a filmmaker for things that go bump in the night. But the hauntedness of contemporary existence — the sense that ordinary experiences of work, sex and travel unfold within invisible networks in response to unseen forces — is a theme he often revisits. His camera moves stealthily, hovering at shoulder level like a stalker or a spy, silently observing people who believe themselves to be alone. The viewer is less a sharer of Maureen’s solitude than an intruder, and the cool allure of Personal Shopper is accompanied by a not-unpleasant tingle of voyeuristic shame.

“Maureen herself sometimes seems more spectral than physical, even as her bodily presence, slipping in and out of rooms and clothes that don’t belong to her, is the film’s singular constant and the source of its curious emotional power. She is in limbo, caught between worlds, suffering from the disorientation that so often accompanies mourning. Her untethering from reality is echoed in the film’s matter-of-fact departure from realism, and her inertia is the expression of an overwhelming sorrow. Personal Shopper is sleek and spooky, seductive and suspenseful. It flirts with silliness, as ghost stories do. And also with heartbreak.”

March 10, 2017by Jeffrey Wells9 Comments
« Previous post
Again, A Headline Summary That Flat-Out Lies
Next post »
On A Carousel