I Could “Watch” It On The Page Right Now

A guy has sent me a January 2016 draft of Martin McDonaugh‘s Three Billboards in Ebbing, Missouri. The trailer popped on 3.23.

“Easily McDonagh’s best,” the guy says. “Instead of getting cute at the end, it gets human. The trailer is great but it doesn’t give the drama enough credit. I think it’s easily his most mature, humanist film to date. There’s a No Country For Old Men vibe.” Now I’m wondering if I should read it or wait for the film. This is sounding more and more like a perfect film for Cannes. Everyone will probably praise it, and it’ll kick off Frances McDormand‘s Best Actress campaign to boot.

Should Fox Searchlight re-think their alluded-to policy of never screening a potential award-season hottie on the Cote d’Azur? The conventional Oscar strategist advice is to never shoot your wad in Cannes but wait for Venice, Telluride and Toronto. How then did No Country, which premiered in Cannes on 5.19.07, ever manage a Best Picture win? 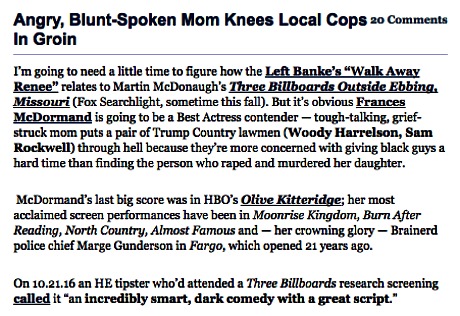 I despise Caleb Landry Jones, the slurry-voiced, freckle-faced young actor who shares the first scene with McDormand, the guy she’s talking to about what she can and can’t say on a billboard. I’ve listened to his response seven or eight times on headphones, and as best I can tell he’s saying “hoh bee sahls I hate this mothah.” (In response to which McDormand say, “That’s right.”) What he’s trying to say is “I guess you’re Angela Hayes’ mother.” I HATE this guy. I also couldn’t understand a word he said in Get Out.