There are four ways to mount a smart-phone gripper for your car — (a) dashboard, (b) windshield suction-cup, (c) clip-on magnetized and (d) sticking a stabilizing device inside your CD player, which no one uses anymore because they’re all streaming or aux-jacking from their smart phones. I have both a magnetic holder (which necessitated buying a magnetized iPhone 6 Plus protective cover) and a CD-player device. The problem with the latter is that they’re cheaply made (or at least the ones I examined in an auto-parts store a couple of weeks ago were) and therefore fragile, and so the mount falls to the floor when you cough or stare at it too hard. Any way you slice it everyone needs one of these damn things, for GPS navigation if nothing else. You can’t balance your phone in your lap or hold it in your hand while you drive with the other. You’d think someone would make a really good, BMW-level model that isn’t made of the cheapest and most brittle plastic. 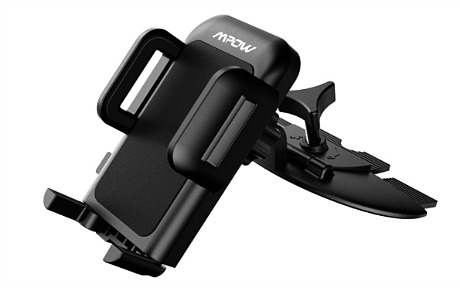 There is no Fate of the Furious. It doesn’t exist in my head or this realm, and anyone who pays to see it this weekend is a stupid animal, and the 65% of Rotten Tomato critics who gave it a left-handed, “what the hell” pass can never be forgiven.

Posted on 12.12.16: “The fact that I adore grimly serious fast-car movies means that I have no choice but to loathe the Fast and Furious franchise, and to condemn F. Gary Gray‘s The Fate of the Furious (Universal, 4.14.17) sight unseen. Because this franchise has steadfastly refused to invest in any semblance of road reality, and has thereby locked me out of the action time and again.

“Because I really love that low-key Steve McQueen machismo thing. I worshipped the driving sequences in Nicholas Winding Refn‘s Drive. Those screeching, howling tires and clouds of smelly white smoke in their wake. The kind we can really believe in. Hey, guys? McQueen is looking down from heaven, and he thinks you’re all pathetic. Particularly Diesel and Johnson.”

Posted on 4.2.15 (and the dates don’t matter because the Furious franchise is a steady sewage stream): “When a big, stupid, assaultive franchise flick is about to open and break the box-office, as is the case with [fill in the Furious blank], most critics play it smart by ‘reviewing’ with a light touch. Like smirking bullfighters, they toy with the beast rather than plunge a lance. ‘What’s the point of actually taking this one on?,’ they seem to be saying. ‘A pan will just make me and my newspaper or website look old-fogeyish and out of touch with the megaplexers.’

“Just because someone is dead does not mean they have changed. [But] you should never say bad things about the dead, you should only say good so…Joan Crawford is dead. Good.” — actual Bette Davis quote, delivered in the wake of Crawford’s death on 5.10.77.

Early today a journalist friend mentioned that Kathryn Bigelow‘s Detroit (Annapurna, 8.4) may be a politically correct tinderbox waiting to ignite. Me: “Because Bigelow is white, you mean?” She: “It sounds nuts and yeah, sooner or later the comintern and their SJW agendas will trigger a backlash, but right now a film about a black riot directed by a white woman probably means a firestorm, or at least some pushback.” Me: “So who should’ve directed this? Dee Rees [i.e., the Mudbound helmer]?” She: “Black and gay…yeah, that’s two boxes checked. Although it would be even better if she was transgender [laughs], but yeah, she’d have been great.” Me: “The fact that Bigelow is a seriously gifted director who cares a lot about the right and wrong in this 50-year-old situation…that’s secondary? What matters is that she’s white? Anyone who would straightfacedly object to her helming of Detroit because of her pigmentation is categorically insane.” She: “This is how people think now, the way it is. And the British thing…John Boyega and Will Poulter playing Americans, that’s also a hurdle.” Me: “These people are in serious need of medication.”

Another journo pal says there may actually be something to this (i.e., an adverse p.c. reaction might happen) because there were no black people involved in a senior capacity behind the camera. Unfuckingbelievable

5 Comments
Now This I’m Excited About

It seems obvious that the script for Barry Levinson‘s The Wizard of Lies, written by Sam Levinson, Sam Baum and John Burnham Schwartz (and based on the same-titled book by Diana B. Henriques), is top-tier. And that the performances — particularly Robert De Niro as Bernie, Michelle Pfeiffer as Ruth Madoff and Alessandro Nivola as Mark — are up there also. The HBO premiere is on 5.20, or five weeks off. At this stage HBO is surely offering online access to select press…no? I’ll be in NYC between 5.5 and 5.11 — perhaps a theatrical Manhattan premiere around then? Principal photography began on 8.31.15. Costarring Hank Azaria, Nathan Darrow, Sydney Gayle and — unusual move — Henriques playing herself.

How did Luke Skywalker, whose voice was so chirpy and Tom Sawyer-ish when young, manage to grow this raspy, grizzled sound without drinking Jack Daniels and smoking unfiltered Gitanes for 40 years? I think I’m done with Skellig Michael, no offense — too many shots of those green craggy cliffs. Rey and Luke in training. “What do you see?” Luke asks. “Light…darkness..the same old visionary Jedi mumbo jumbo razmatazz.” Luke’s kicker: “It’s time for the Jedi…to end.” Meaning exactly what, asshole? You can’t arbitrarily “end” a fraternity of souls with the ability to harness wondrous magical energy that always was and will be. Same old running, jumping and standing still. Same old hundreds of spacecraft swarming through the heavens in close proximity. Same old explosions. Same old Disney paycheck motivations. I’m down with Oscar Isaac’s Poe Dameron, but The Force Awakens told us that there’s no reason whatsoever for Adam Driver‘s Kylo Ren to wear a Vader-like mask…none! 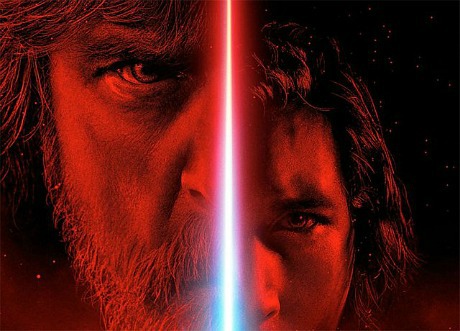 Reminder: All serious filmmakers understand that they’re prohibited from using one of those “abrupt shocking wakeup followed by hyperventilating” moments. Just as they’re forbidden to use a “lead actor in CG-driven action-fantasy film does swan dive off a skyscraper or a tall cliff” shot.