50 years later, the fire that time. Memory detour, flashpoint, cuts and close-ups, an inferno rekindled. A jarring, presumably riveting descent into hell. Directed in the usual bracing, deep-dive fashion by Kathryn Bigelow. Written by the intrepid Mark Boal. Shot by the legendary Barry Aykroyd (The Hurt Locker, United 93). Edited by the masterful William Goldenberg (Zero Dark Thirty, The Insider). A possible…call it a presumed award-season headliner that dares to open on August 4th. Go bold, break the mold. 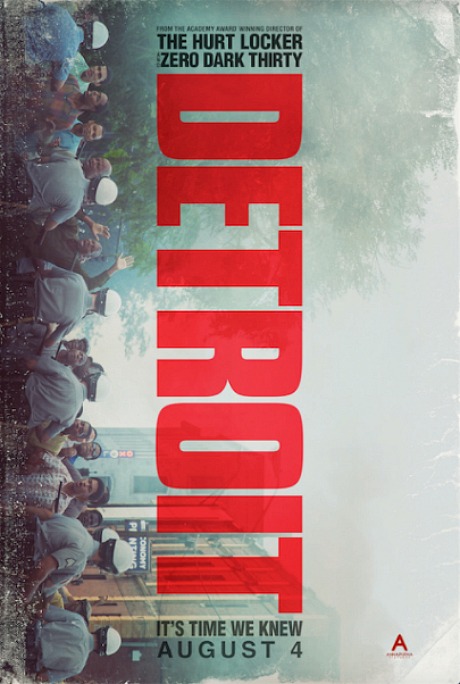 “One of the bleakest chapters in American history — four days that stunned a nation and left scars on a great city that are still seen and felt today.” — from a 7.22.12 Time.com article showcasing the Detroit riot photos of Lee Balterman.

From Wiki page: “The 1967 Detroit riot, also known as the 12th Street riot, was a violent public disorder that turned into a civil disturbance in Detroit, Michigan. It began in the early morning hours of Sunday, July 23, 1967. The precipitating event was a police raid of an unlicensed, after-hours bar then known as a blind pig, just north of the corner of 12th Street (today Rosa Parks Boulevard) and Clairmount Avenue on the city’s Near West Side.

“Police confrontations with patrons and observers on the street evolved into one of the deadliest and most destructive riots in the history of the United States, lasting five days and surpassing the violence and property destruction of Detroit’s 1943 race riot.

“To help end the disturbance, Governor George W. Romney ordered the Michigan Army National Guard into Detroit, and President Lyndon B. Johnson sent in both the 82nd and 101st Airborne Divisions. The result was 43 dead, 1,189 injured, over 7,200 arrests, and more than 2,000 buildings destroyed.

“The scale of the riot was surpassed in the United States only by the 1863 New York City draft riots during the U.S. Civil War, and the 1992 Los Angeles riots. The riot was prominently featured in the news media, with live television coverage, extensive newspaper reporting, and extensive stories in Time and Life magazines. The staff of the Detroit Free Press won the 1968 Pulitzer Prize for general local reporting for its coverage.”