Here‘s a nicely composed inside-the-West-Wing piece by Vanity Fair‘s Sarah Ellison, not just about the Jared Kushner-Steve Bannon clash but the constantly shifting ground benath everyone’s feet. Everyone, that is, except for Kushner and Ivanka Trump.

“[Steve] Bannon’s real undoing in the eyes of his boss, according to three people familiar with the situation, involves his perceived attacks through the media against Kushner and Ivanka as liberal Democrats seeking to undermine a more conservative agenda. Bannon’s other big mistake has been taking credit for Trump’s own popularity, such as it is. 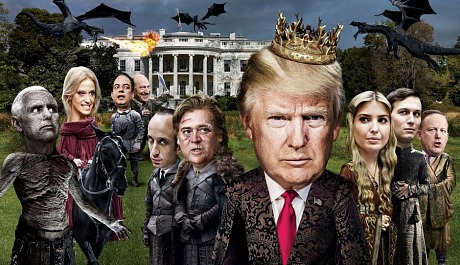 “Referring to [Bannon’s] Time cover, a senior administration official told me, ‘He is very talented at making himself seem the hero of the conservatives who elected Donald Trump’ — the implication being that if you lose Bannon, you lose them. ‘It’s a very smart thing to do on his part,’ this official added, ‘but ultimately it’s not a sustainable strategy for him. The president sees through that kind of thing, and he’s aware of what’s happening.”

“The official went on: ‘The reality is, if he keeps this up he’s not going to be here.’

“Another strike against Bannon is that, when speaking of the Freedom Caucus ahead of the planned vote on repealing the Affordable Care Act, he assured the rest of the senior team, ‘I’ve got these guys taken care of,’ according to someone close to the West Wing. ‘We don’t have to worry about them.'”