What Does Shape of Water’s 12.8 Release Mean?

Guillermo del Toro and I did breakfast at the Hotel Majestic during the 2015 Cannes Film Festival. He was serving as a juror. While our chat was off the record, I think it’s fair to mention that he said he was tiring of making big, effects-driven movies (i.e., Pacific Rim) and that he wanted to tone it down and go in a more personal vein. I took that to mean he wanted to make more films in the vein of Pans’ Labrynth, The Devil’s Backbone, Chronos, Mama, The Orphanage, etc. (The last two he produced but didn’t direct.)

I’ve been presuming all along that The Shape of Water, a period fantasy-adventure which he directed and co-wrote, would be one of these. But will it be? The fact that Fox Searchlight has announced a 12.8 release date indicates a belief in its award-season potential. Or does a December release mean all that much when we’re talking about GDT’s fantastical realm? I’m saying in the most respectful and laudatory terms that GDT doesn’t do “Oscar friendly” as a rule. I mean that as high praise.** 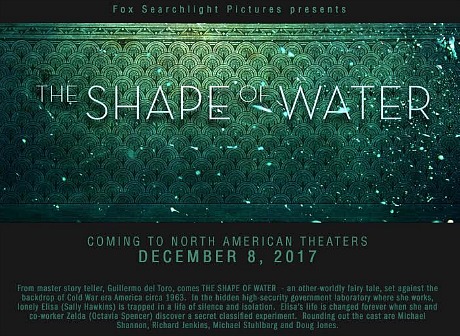 Logline: “An other-worldly story, set against the backdrop of Cold War era America circa 1963. In the hidden high-security government laboratory where she works, lonely Elisa (Sally Hawkins) is trapped in a life of silence and isolation. Elisa’s life is changed forever when she and co-worker Zelda (Octavia Spencer) discover a secret classified experiment.”

Fair question: We are told over and over in Hidden Figures, which is set in 1961 and ’62, that brilliant, go-getter African-American female mathematicians (Taraji P. Henson, Octavia Spencer, Janelle Monae) encountered racial resistance and considerable stress when it came to being valued and properly titled for their work. Not as high-level technicians, remember, but in a second- or third-tier capacity as math whizzes. But in The Shape of Water, which is set one year later, Octavia is working in a high-security government laboratory involved in a secret classified experiment. In other words, the bureaucratic government mentality that made her life difficult in ’61 and ’62 has evaporated in ’63, allowing Octavia to work at a much higher level and on a very touchy secret project. That’s progress.

** A friend writes that Pan’s Labrynth “was nominated for six Oscars and won three. It should have been a Best Picture nominee if not the winner. That’s pretty Oscar friendly if you ask me.”

My response: “Yeah, but you know what I mean. Guillermo is brilliant, world-class genius type, but he’s made more popcorn-friendly movies than any serious director I can think of. His imagination is way out there, and he has this thing about monsters, and he tends to be more into production design and comic-book elements than your average stodgy Academy member has the patience for.”