During Cinemacon I met with director Aaron Salazar, who’s in his mid 20s and trying to get over. We went out for some Asian food one evening and shot the shit. He’s sharp and knowledgable, and loves Call Me By Your Name as much I do, and therefore has excellent taste. Last year his short film, Gas ‘n’ Go, was shown in Cannes under the aegis of the Court Metrage program. He plans to attend again this year.

I’ve never made a short film, much less had it accepted at a major film festival, so my respect for Aaron is in no way blurred or diminished by my mixed reaction to his short: “Cool concept but I hated the soundtrack. You should have used shallow bubblegum music. Why did the hoodie-wearing bad guys shoot the T-shirt-wearing fat guys? And what kind of candy-ass runs away when he finds two bodies?”

Aaron’s response: “Looking back on it, there’s a lot of things I’d do differently. It’s been a year since I made it. I’ve seen it too many times. I know everything that’s wrong with it. Perhaps one day I’ll remake it with an actual budget and some behind-the-camera help.”

I asked Aaron for a basic rundown — here’s what he sent: “I’m glad I was able to help you see some culture in Las Vegas. As you know I’m a student. I work full-time in the fast-food industry. When I’m not working or at school, I’m reading and writing and working on getting my next project off the ground. I’ve written two features. As you know I wrote and directed a short that was accepted at the Cannes Film Festival’s Court Métrage program last year. I attended and was instantly overwhelmed by all that I didn’t know. I’m attending this year in hopes to make better, lasting connections.

“I’m in and out of Los Angeles quite often to meet with producers, cinematographers and actors. I’m trying to do everything I know how to make it in this world, but I’m at a loss. I’m not giving up but writing some more while I keep reaching out in hopes that maybe someone will be interested in giving me a chance. If I mess it up after then that’s on me.

Last year I did an interview with the local NPR station here in Vegas. 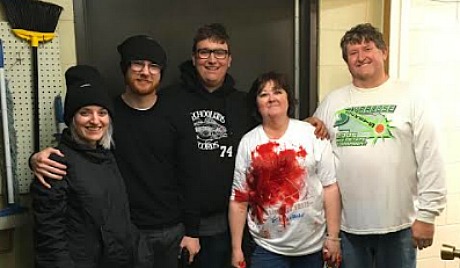 April 9, 2017by Jeffrey Wells4 Comments
« Previous post
After Five Months of Wound-Licking…
Next post »
“I Felt Unfettered and Alive”