Will All Movies One Day Be Watched With One Eye While Checking Twitter Feeds?

In a 4.17 Indiewire piece, critic David Ehrlich laments the impression that Netflix movies aren’t really movies because the only theatrical experience they’ll receive is at this or that film festival. Because once they turn up on Netflix, they’re just part of the churning digital swarm on this or that device. As Ehrlich puts it, it’s the fate of all Netflix movies to be “quietly uploaded to a computer server and added to an ever-expanding menu of content in the cloud. I saw it in a theater; you’ll see it buried somewhere between Iron Fist and Sandy Wexler.”

If I had labored hard and gone into heavy debt to make a feature film, I would be overjoyed if Netflix picked it up because at least I would be made whole and could then go on to make another film. But I would also feel a bit drained knowing that my film will never experience the slightest theatrical pulsebeat. 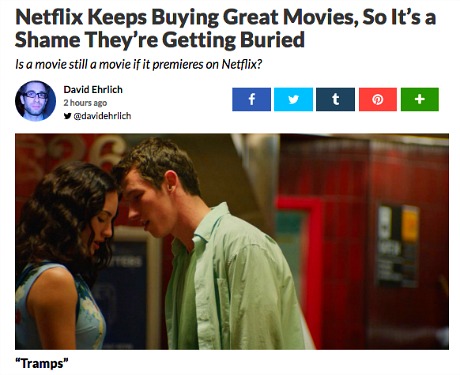 In the eyes of many Amazon is doing it right with their commitment (recently reiterated at Cinemacon) to give new films some kind of theatrical exposure before streaming them. In Ehrlich’s view, a Netflix acquisition means being sent to a kind of digital elephant’s graveyard.

“If a movie premieres on Netflix, is it still even a movie?,” he writes. “In an age where the word ‘film’ is often a misnomer and content is classified less by the intent of its production than by the means of its distribution, it could be said that movies — at least for the time being — are simply things that play in movie theaters. It may seem like a matter of semantics, but I think we’re talking about qualitatively different experiences.

“When Netflix buys a movie, it guarantees that the vast majority of people will never get to see it in its full glory. It’s the equivalent of a museum buying a work of art, locking it in a vault, and making photocopies so widely available that people lose sight of the fact that they’re missing out on the real thing.

April 17, 2017by Jeffrey Wells33 Comments
« Previous post
Live And Die By The Sword
Next post »
Clock Coming Round on LAFF