“It’s a gray, forbidding film about howling winds and chilly people. It’s a watchable, well made, at times better-than-decent ride, but it really doesn’t hang together. I’m sorry but anyone who says ‘wow, this is really great!’ is just full of it. But there’s no way to kick this around without dropping all kinds of spoilers so I’m going to keep things vague.

“For what it’s worth Scott shoots the hell out of Prometheus, but the script isn’t integrated. It’s half-assed and lacks a clear hard line. The fault, I hear, is mainly with Damon Lindelof‘s rewrite of Jon Spaihts‘ straightforward Alien prequel script.

“Roughly 40% delivers some absorbing futuristic technological razmatazz and exposition on a long voyage to a distant planet, 30% to 35% is proficient scary-icky stuff (slimy alien snakes) and 20% is some kind of half-hearted spiritual quest film on the part of Noomi Rapace‘s Shaw character, a scientist who wears a crucifix.

“Most ticket-buyers will go looking for a standard alien flick and come away going ‘hmm, I dunno but this isn’t quite it.'” 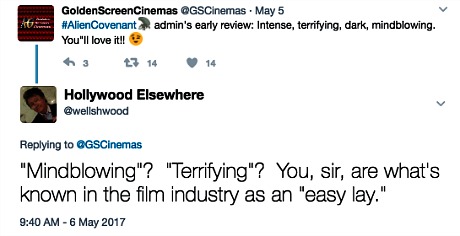 May 6, 2017by Jeffrey Wells25 Comments
« Previous post
May Is Bustin’ Out All Over
Next post »
Nolan Wants That Oscar