Friend: “What did you think of Sofia Coppola‘s The Beguiled? I thought it was a slow–burning hoot. Coppola completely vacuumed out any of the original’s over-the-top sequences for more arthouse vibes and painterly pastoral framings. Those last 30 minutes are terrifically entertaining.”

Me: “Whoa, calm down on the ‘terrifically entertaining’. It’s pretty good, but not all that different from Don Siegel‘s The Beguiled. Less heated with more emphasis on suggestive humor. And shorter than the Siegel version by 11 minutes, 94 minutes vs. Siegel’s 105. Which I rather liked. Yes, the apple pie scene is amusing if not quite ‘funny’. I think Nicole Kidman barking “get the saw!” was meant to challenge Faye Dunaway shouting “get the axe!” in Mommie Dearest.”

Friend: “How about ‘Edwina! Bring me the anatomy book!'” 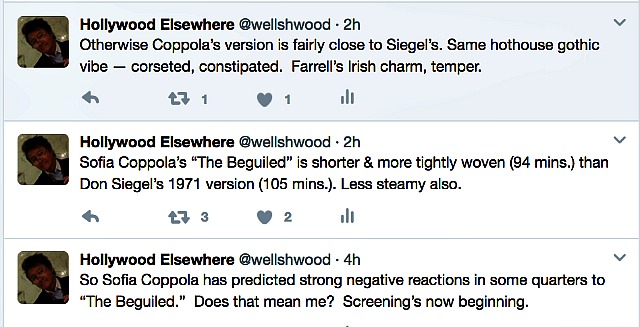