At Best, We’re Probably Stuck With Trump Until Sometime In ’19

From Sasha Abramsky’s 5.18 Nation piece, “Trump Is a Cornered Megalomaniac”: “Yes, it’s a cause for celebration that this miserable, cruel man is on the ropes. [But] men like Donald Trump do not fade gently into their political night.

“Rather, with all nuance sacrificed in pursuit of their senescent need for the spotlight, they scrabble and scratch, lash out and fight. With no self-limiting or self-correcting moral gyroscope, they go down whatever paths they believe offer them the best chance of survival. 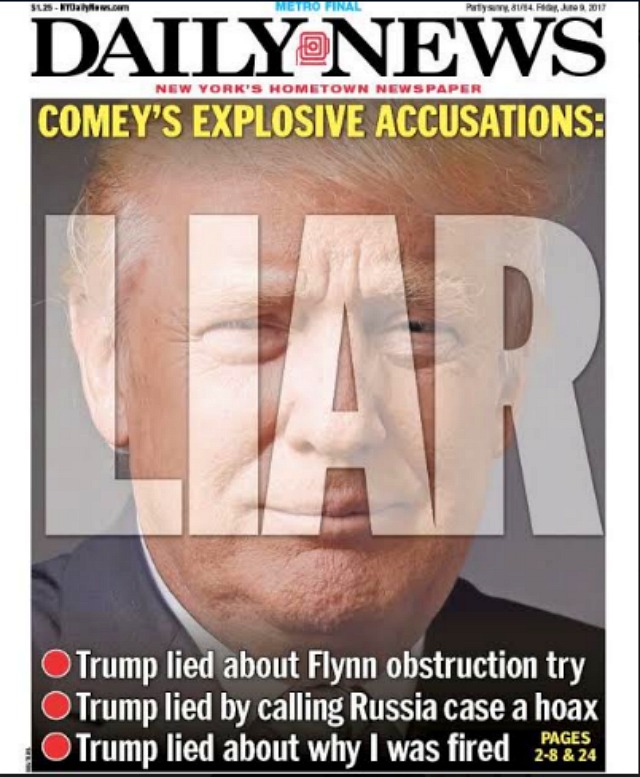 There’s something vaguely underwhelming about this N.Y. Daily News cover headline. Not bad, but it doesn’t quite slam it home on some level.

“[This] is a soulless, amoral thug, a con artist now fighting for his life. I do not doubt that, in the end, Trump will be destroyed, that all of those craven, fair-weather friends, those men and women in the GOP whom he embarrassed and humiliated, mocked and deliberately hurt throughout the primary process but who embraced him upon his electoral success, will turn on him as soon as they believe they can so do without destroying their own political careers.

“I do not doubt that he will be derided in the history books as an unmitigated catastrophe for the country. But while those fair-weather friends are still girding for their fight, and the historians are still whetting their pens, Trump, our wounded despot, remains a clear and present danger.”