Why pay to see a film theatrically when you own a first-rate Bluray of same? Or when an HD version is easily streamable? I’ll tell you why. I don’t know why. Okay, to get out of the house. And, I suppose, to savor well-amplified music. In the case of Franc Roddam‘s Quadrophenia, which is showing this evening at the Aero, that would be The Who’s “Quadrophenia” album. Which I saw performed by the actual Who, Keith Moon and all, at the L.A. Forum on 11.23.73.

The ultimate reason is that Quadrophenia, a 1979 release that uses the 1964 Mod vs. Rocker mania as a backdrop, is an unqualified masterpiece. Call me eccentric, but every now and then I feel obliged to pay respect to such films by watching them from the fifth or sixth row with a container of salted popcorn.

“I’ve said this two or three times, but the older I’ve gotten the more I’ve come to realize that this film — loosely based on the Who rock opera and basically the story of Jimmy Cooper (Phil Daniels) and his identity, friendship and girlfriend issues — belongs in the near-great category. Hands down it delivers one of the craziest, most live-wire recreations of mad generational fervor and ’60s mayhem.” — from a 6.17.12 HE posting.

Excerpts from “Quadrophenia: Jimmy vs. World” by Howard Hampton:

“Quadrophenia is the closest thing England has produced to its own Mean Streets, but its most invigorating aspect is the way it systematically upends expectations. It shares Mean Streets’ dedication to emotional veracity, but its midsixties streets are meaner, more inhospitable — far from the sensual precincts of Little Italy (and from the madding elites of Swinging London). Period songs aren’t given Scorsese’s seductive, exhilarating sheen; these kids aren’t all right, and they’re too wired on pills to really take pleasure in anything but human-pinball aggression.

“Using the Who’s heavyweight score primarily in flashes and spurts, for aural color or outbursts of blocked feeling, the film subtly distances itself from its own soundtrack, holding the music at a certain remove.

“For a movie whose centerpiece is a brilliantly panoramic pitched battle between hundreds of mods and rockers, and despite all the violence, blaring music, and general cacophony that erupt throughout it, Quadrophenia maintains an extraordinary sense of deadening silence looming in the background. The intermittent blasts of noise and chaos in this ravishingly glum film are protests that fall on deaf ears: a wall of social denial absorbs the flailing clamor like bricks and mortar pitted against a confused young man’s stubborn battering-ram head. 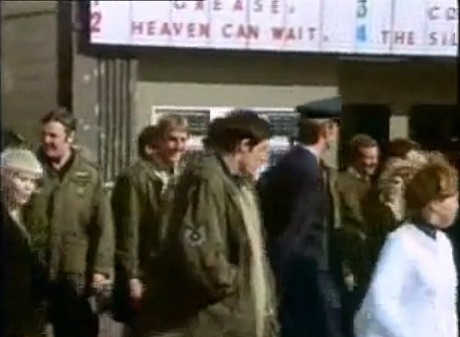 “Quadrophenia is the anti-Tommy, however: ruthless realism subsumes motor scooter spectacle, and the Who’s music is deployed sparingly until the last section of the picture; even then, it seems a discrete, almost Brechtian counterpoint to the action rather than a direct expression of what’s happening on-screen.”

“I first saw Quadropehnia at Manhattan’s 8th Street Playhouse when it opened in November ’79, at the height of my often unemployed “am I even good enough to attempt to be a journalist?” weltschmerz.

What a shock to see this clip and realize that Roddam forgot to change the letters on a movie marquee while shooting a crowd scene, and so we read, however briefly, that Warren Beatty‘s Heaven Can Wait and Randal Kleiser‘s Grease — both released in the summer of ’78, when Quadrophenia was shooting — are the current attractions. What an embarassment for production designer Simon Holland (who’s now dead). I mean, it’s so easy to change the letters on a marquee. It’s not like it costs anything.

For me, Quadrophenia offered my first encounter with Sting. Dandied up in flashy threads, his hair dyed platinum blonde, Sting played a kind of celebrity mod figure called “Ace Face.”

I knew of The Police in ’79, of course, but I didn’t really tune into them until ’80. During a 3.31.15 interview with Police guitarist Andy Summers (the subject was Can’t Stand Losing You: Surviving the Police), it killed me to learn that The Police performed a CBGBs gig one night in the fall of ’78. Two shows in fact, and that not many people attended the second show, Summers said. I was living at 143 Sullivan Street at the time, and I could have just walked over and seen them up close. Kick me.