Late yesterday afternoon I finally saw Patty Jenkins‘ Wonder Woman. I found it stirring from time to time, and, like everyone else, I loved the fresh company of a canny and compassionate female superhero who knows all the angles and pretty much can’t be defeated. Or shouldn’t be. I was thoroughly swimming in Gal Gadot‘s performance as Diana Prince/Wonder Woman, and particularly her character’s loathing of war and a nurturing, humanist determination to rid the world of this pestilence.

I wasn’t a fan of the bluish smokey gray color scheme during the World War I section, but I enjoyed some of the humor and the general winking attitude and professional aplomb. It’s a good film of this type as far as it goes. I didn’t mind a lot of it and I loved certain portions. Really. It’s not good enough to become a Best Picture contender in the fall, but I can understand why some who are super-thrilled by the cultural connotations would want to see this happen. 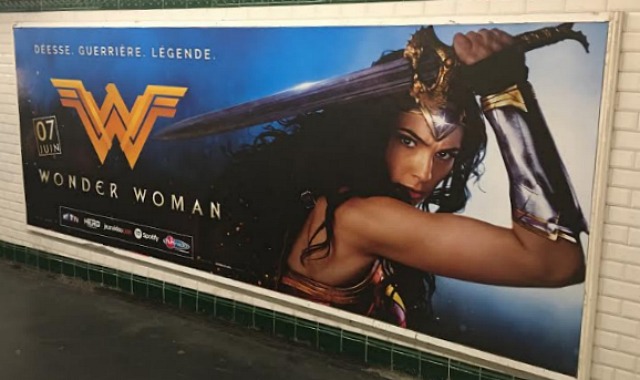 I also found Wonder Woman depressingly familiar. For this is yet another D.C. Comics superhero flick, and that means submitting to the same old D.C. formula elements — a draggy origin story that goes on too long, a romantic interest (Chris Pine‘s Steve Trevor), a team of colorful allies (Saïd Taghmaoui, Ewen Bremner, Eugene Brave Rock, Lucy Davis), several action set pieces, a pair of formidable but vulnerable villains (Danny Huston‘s Erich Ludendorff, Elena Anaya‘s Doctor Poison) and a super-demonic uber-villain whose cover identity is only revealed at the end.

But I really loved Gadot and her great spirit and especially that dark twinkle in her eyes, but Jenkins’ decision to keep Wonder Woman in a harness until this 141-minute film hits the halfway mark felt a bit frustrating. As everyone knows by now the film doesn’t really kick in until this exuberant Amazon warrior sheds her Diana Prince attire and thrillingly goes one-on-one with the Germans on the muddy battlefield, which, as noted, happens around the 70-minute mark.

The show happened at the UGC Cine Cite Les Halles. There was a big fucking line in the lobby, and they kept us waiting forever. The start time was supposed to be 6:45 pm, but with the endless trailers and commercials the film didn’t actually start until 7:10 pm, so I wasn’t over until roughly 9:20 pm, which caused me to be late for a 9:30 pm meeting at a cafe on rue Bretagne.