“There were brawls. I had guys die. You know, the show would end and someone’s still sitting there and then you realize they’re never getting up. I had a projectionist die one time in the booth. I heard the crowd booing, and then the movie’s off the screen. This is when there were carbon arc projectors, so a lot of times these projectionists would just fall asleep or they’d be screwing somebody up there and they’d forget to change the carbon arc. So I go up there…and the guy’s dead on the floor. I called the cops, and then I thought — this is how sick you’d get after being in New York for a few years in those days — I thought, ‘This is my big chance to actually shame a New York audience.’ So I went into this theater and I looked at them, and I said, ‘I’m very sorry for the inconvenience [but] the projectionist has passed away. We have someone going up there now, and your film will be on shortly.’ And they booed me!” — Savages author Don Winslow recalling a Times Square movie-theatre gig in the ’80s, reported by Bilge Ebiri in the Village Voice. 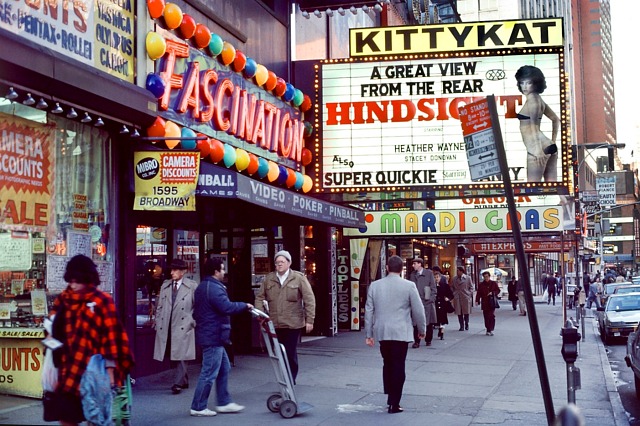 True story #2 (i.e., my own): I worked as a Brooklyn theatre manager sometime around late ’79 or early ’80. I honestly forget the name of the theatre, but it was a midsize house that played mainstream films. I remember telling the guy who’d hired me that I’d been a licensed projectionist in Connecticut and that I’d worked at the Carnegie Hall and Bleecker Street Cinemas under Sid Geffen. So I got the gig, but I became bored with the job very quickly. On top of which I was never all that reliable about keeping track of ticket sales and whatnot. I wasn’t skimming — I just wasn’t an efficient mathematical type. And then I decided to play Warren Zevon‘s Excitable Boy over the theatrical sound system before the show began. And I didn’t play it quietly — I had the sound levels up to at least 7 or 8. I was eventually canned, of course. The story of my life from the time I was 17 to the launch of Hollywood Elsewhere in August ’04 was “and then I got fired.”

True story #3: I led a small rebellion inside the old Dan Talbot-run Regency Theatre in ’79 or thereabouts. It was during a weekend showing of North by Northwest. Cary Grant and Eva Marie Saint were on the train from NY to Chicago, and then the projectionist skipped a reel and suddenly Grant was in the cornfield dodging bullets from the biplane. (Or something like that.) I was up in a flash and running upstairs to the booth. I knocked sharply on the door…”Yo, hello?” (rap, rap, rap). Two more guys came up to join me, and then a third and a fourth. No response from inside so another guy stepped up and knocked on the door with me. The projectionist came out, saw the angry “crowd” and freaked. He was like Marcel Bozzuffi when he was cornered by that MTA official on the subway car in The French Connection…”Get back…get back!” We told “Marcel” about his error (he obviously hadn’t been watching the screen). He eventually calmed down and fixed the problem.