57 Comments
Priebus Canned As Mooch Has His Way — Bannon Next?

From N.Y. Times report filed a few minutes ago: Reince Priebus, the establishment Republican-turned-loyalist to President Trump who served as his White House chief of staff for the last six months, was pushed out Friday in the latest convulsion in a chaos-wracked West Wing to which he had repeatedly failed to bring some semblance of order.”

There’s nothing worse than knowing you’re probably about to be fired and just waiting for it to happen. Tick, tick, tick. Hollywood Elsewhere wants Steve Bannon to get the axe next. Communications director Anthony Scaramucci made it clear in that New Yorker interview that he regards Bannon as a self-fellator. Kick his ass to the curb!

Another Times excerpt: “In barely half a year on the job, Mr. Priebus never won the full confidence of the president nor was granted the authority to impose a working organizational structure on the West Wing. Always seeming to be on the edge of ouster, Mr. Priebus saw his fate finally sealed a week ago when Mr. Trump hired Mr. Scaramucci, an edgy Wall Street financier, over the chief of staff’s objections. Mr. Priebus’s ally, Sean Spicer, the press secretary, resigned in protest.”

A guy who passed along reactions to an Detroit screening a while back mentioned that there might be some grousing about the film not sufficiently investing in black women characters, whatever that means or implies. Consider this excerpt from Angela Jade Bastien’s 7.28 review:

“Before the film’s release, a lot of fury was unleashed when it became clear black women wouldn’t be important to this story. Films about black history seldom grant black women the importance they deserve. In Detroit, black women are in the margins. They’re dutiful wives placing a gentle hand on the shoulder of their husbands; they’re silent spectators in courtrooms; they’re sweet hotel clerks with no real weight in the story. Although an elderly black female character voices dialogue that is the closest the film gets to any commentary: ‘No way would they do this to white men,’ she says angrily to a news reporter hungry for a pull quote.

“But Detroit’s disinterest in black women despite significant time in the film being spent beyond the Algiers Hotel incident is the least of its problems. What leaves the film feeling grotesque and even a bit exploitative is its soullessness.”

This is what triple-A Bigelow-Boal cinema is like. This.

“It’s an odd thing realizing that you’re seeing a movie that is a step above most of what you have seen in the commercial cinema this year,” MCN’s David Poland wrote on 11.25.12. “My pulse gets faster, I start being a little hyper-vigilant, even though I don’t take notes in movies — at least the first time through — and I start hoping, beat after beat, scene after scene, that the high won’t disappear.

“And that’s what I felt from the very first minutes of Zero Dark Thirty tonight.

“Kathryn Bigelow & Mark Boal are in a kind of sync that is rare in the history of cinema. Boal has raised the bar on the output of Bigelow’s master-level visual skill by giving her material to work with that is seriously challenging and meaningful. She’d make a great Bond movie, I suspect, but that was her earlier career. This is the stuff of Lean and Bolt. Of course, even that relationship had its misses. But this, the second movie for this duo, was ripe to be mediocre or even horrible. So there was enormous pressure to deliver…and in spite of that, they did.

“Comparisons to All The President’s Men are completely valid. But an even stronger beating heart lies beneath this material. B&B personalize the big picture for the audience in a not-so-tricky way…they put us in the room with torture…they remind us of the violence and danger inflicted by terrorists…and they let us experience the ‘it’s a job’ side of life and death. Because the truth of this story…the truth of almost all stories…is the balance between all those truths. ATPM has a lot of that balance too… but in the end, it is still about reporters and The Big Story. The stakes are much higher when lives are on the line in a very human, not movie-like, way. And Jessica Chastain is B&B’s way into that humanity.

“There are some truly great performances by actresses this year. Marion Cotillard is a miracle in Rust & Bone. Jennifer Lawrence is going to be one of our great stars for years to come and her superstar turn in Silver Linings Playbook shows us why, beyond doubt. But Chastain turns the double trick…movie star stuff and the in-your-face character work…and her movie is a more overt heroic tale than either of the other films.

Just getting this straight: It’s a “mafia” thing to lament Telluride’s decision to deepsix one of 2017’s finest films hands down because of intramural film festival politics and elbows and egos? 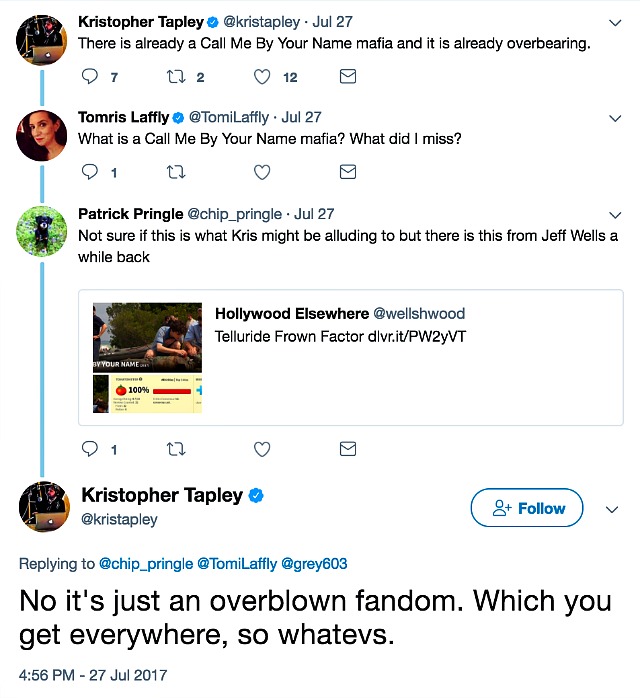 I saw Rob Reiner‘s LBJ in Toronto last year. I didn’t hate it, but it mostly feels like a dutiful, going-through-the-motions thing. Not bad, okay at times, an in-and-outer. But not as commanding as HBO’s All The Way, and Bryan Cranston performance as the 36th president has more juice and bombast than Woody Harrelson‘s. The best Johnson ever was Randy Quaid in LBJ: The Early Years (’87). You can tell right off the bat that Harrelson’s appearance and accent aren’t right. He doesn’t have that Texas hill country drawl, which had a Huckleberry Hound-like tonality. On top of which Woody sounds awfully similar to Carson Wells, the bounty hunter he played in No Country For Old Men. Plus there’s something inhuman about his features.

Last Sunday I grieved over my inability to give Detroit a positive review. I was ready to sing and shout before seeing it, but after two viewings the best I could manage was a mild pan. But I don’t want Detroit to be hurt during this weekend’s limited break. (The real opening is next Friday, 8.4) It’s a nervy, honorable thing made by gifted people with real passion in their veins. We’ll all feel better if it connects than if it doesn’t. But will it?

Limited platform openings are about connecting with early adopters and getting that social-media buzz going, so it’s probably fair to say that the word in the big cities will either make it or break it. Did anyone catch it last night?

I spoke this morning to an attorney friend who sees what he sees and likes what he likes, and I asked him about Detroit. “What about it?,” he said. Those three words were damning enough, but I asked if he plans on seeing it. Reply: “Uhm, maybe…uhm, actually, no, I don’t think so. Well, maybe.”

I’m a little surprised by the 96% Rotten Tomatoes rating. I know what this movie is, and I know what films boasting an over 90% RT rating generally feel like, and Detroit, trust me, is not one of those down-on-your-knees hail hossanah experiences. It doesn’t have that schwing. Big-city critics want to be as approving as possible, of course. They sure as shit don’t want to go thumbs down. I honestly thought Detroit would land in the high ’70s or low 80s. The 86% Metacritic rating is more reality-reflecting than the RT.

I’ve never been one for cruelty or needless vulgarity, and since embracing sobriety five and a half years ago I’ve even…well, now and then I’ll take a couple of steps back and temper my prose before posting. But as an ex-New Yorker and one who grew up in a semi-tough, white-bread New Jersey town (Westfield) that had its share of coarse Italians, there’s something in me that relates to those profane, pugnacious quotes from Anthony Scaramucci in that Ryan Lizza New Yorker piece.

I talked to a hundred guys like Scaramucci in New York-area bars during my drinking days; that cussy big-mouth thing is a bullshit-blowhard routine they all get into, or a good percentage of them.

I despise Scaramucci’s politics, of course, and certainly his devotion to the most deranged sociopath to occupy the White House in the history of this country. But I understand the patter. He’s a New York bullshitter, and I miss that music from time to time. “I’m not Steve Bannon…I’m not trying to suck my own cock” — c’mon, who didn’t at least crack a smile when they read that? And calling Reince Preibus “a fucking paranoid schizophrenic, a paranoiac” — that’s angry, saliva-bomb stockbroker talk. 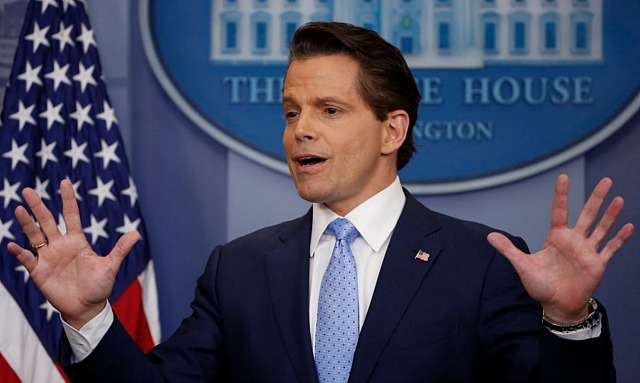 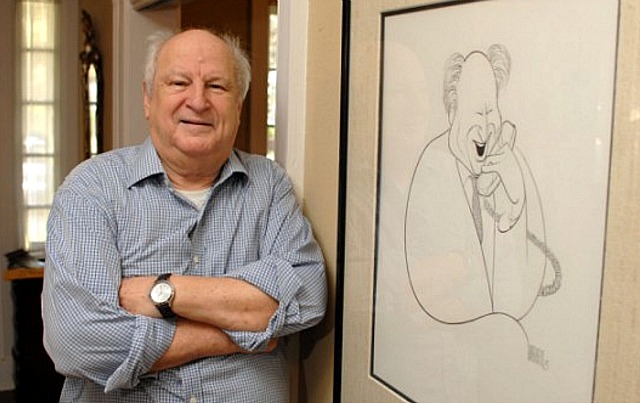 Seriously — Martin Scorsese would be in hog heaven if he could make a film about Scaramucci in a few years. I want to see that movie…please! Scaramucci is Tommy from Goodfellas in a bucks-up, New York-Washington mode.

And speaking of New York bluntitude, there’s a great Bobby Zarem quote about former hotshot columnist Liz Smith in a 7.28 N.Y. Times profile by John Leland (“The Rise and Fall of Liz Smith, Celebrity Accomplice”). When Leland reached out, Zarem said, “I hope it’s for an obituary.”

I’m not saying that’s an unjustified or overly harsh crack on Zarem’s part, but it’s the kind of thing that only a serious New Yorker would say.  I didn’t exactly love working for Zarem in the mid ’80s, but I love that I did in retrospect.