In a 7.21 Vulture article called “Why I Wrote Detroit,” screenwriter-producer Mark Boal explains his saga of research and assembly in plain, straight prose.

Before proceeding the reader and prospective viewer of Detroit should understand that the film isn’t some intense panoramic sweep about the Detroit riots of ’67 but about the notorious Algiers Motel incident. A serious portion of the film takes place inside Manor House, a three-story brick building behind the motel where three black teenagers — Carl Cooper, Auburey Pollard and Fred Temple — were killed by authorities. 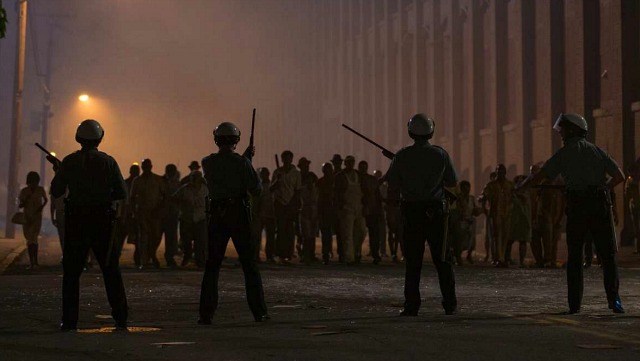 Before reading Boal’s piece I somehow missed that Detroit will open in select cities on 7.28 before going wide on 8.4.

“I chose this story from the ’60s in part because the decade evokes such lively and contradictory associations,” Boal explains. “The summer of 1967 witnessed two of the worst civil disturbances in American history — first Newark, then Detroit. It is troubling even now to watch the news coverage of all that violence and destruction, but make no mistake about it — this was an uprising, a rebellion. This was black America lashing out against an entrenched culture of repression and bigotry.

“And yet the far more widely remembered (and celebrated) spectacle of rebellion from that same moment in time is of the Summer of Love, all those hippies, mostly white, joyfully grooving out in San Francisco. [Today] the love-potion stuff has run its course, diffused into little more than an advertising trope, but the events in Detroit are hard evidence of a cultural crisis that remains unresolved, of two Americas that still don’t know quite how to deal with each other.

“The underlying intention of Detroit was always…to unpack the riot and this one incident at the Algiers from the point of view of its many participants, and thereby enable the audience to experience the events themselves. We wanted viewers not so much to watch the story as absorb it like a physical sensation. This necessitated certain narrative devices, in order to slip the whole thing past the resistance viewers often have [in] allowing troubling feelings to get in.

“I aimed to make the film’s structure feel like a volatile crowd, unpredictable and densely populated. The dialogue was a constantly looming creative challenge. It couldn’t live in the past — it had to strike a middle ground between period authenticity and contemporary relatability. Most of all, the character arcs themselves had to bend to the reality of what the theorists call racial power structures.

“To me, that meant letting go of the screenwriter’s trusty toolbox and instead of using character to guide the plot — i.e., that character determines fate — embracing a plot in which social forces triumph, continuously and tragically, over individual will.

“Beyond that, I don’t have anything prescriptive to say about racism in America, only the sorrowful and perhaps obvious observation that the lessons learned 50 years ago seemed to have been forgotten in the wake of continuing injustices in Ferguson, Baltimore, Baton Rouge, and so many other cities. And while it is indeed an interesting and vital question to ask how much has changed since the 1960s between African-American communities and the police forces that putatively serve them, I leave that discussion to professionals in race and police reform.

“My interest was primarily in the human narrative, and the spiritual costs that the big social forces extract from us as individuals.”