Good parents always show love and support for their children in any way they can, including whatever leanings the kids may have in terms of sexuality or gender identity. There’s no disputing that many if not most gay kids know who they are at a relatively early age, and if they’re lucky enough to have parents who are behind them when this realization occurs, great. But how early is too early? When I was a young teenager sexuality was barely acknowledged by my parents, but these days parents seem to be more engaged at earlier stages.

Four years ago Matt and Lori Duron began talking to the media about how supportive they were of their son C.J. Duron, who was then six years old and leaning in a gay (“gender creative”) direction. They’ve continued to speak out, make appearances and so on. For some time Lori’s been writing a blog about raising C.J. called raisingmyrainbow. All to the good. 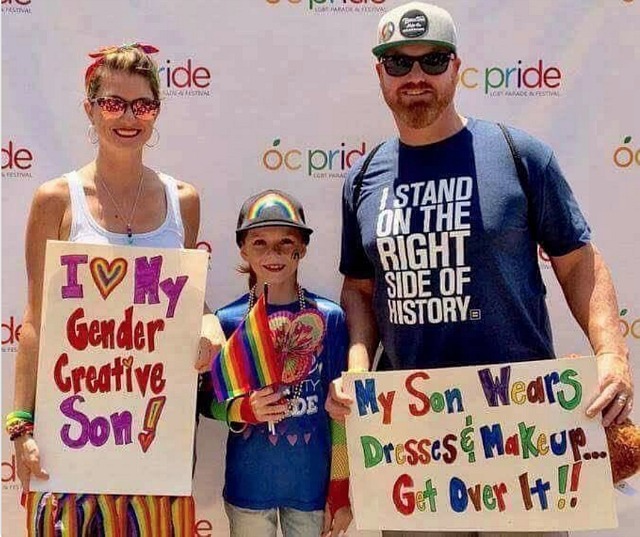 Except in the matter of conservative, Trump-supporting actor James Woods, who on 7.9 tweeted the following to Matt and Lori: “This is sweet. Wait until this poor kid grows up, realizes what you’ve done, and stuffs both of you dismembered into a freezer in the garage.”

Neil Patrick Harris responded yesterday (7.11) by calling Woods’ remark “utterly ignorant and classless…I’m friends with this family…you know not of what you speak, and should be ashamed of yourself.”

Hollywood Elsewhere is on the side C.J., Lori, Matt and Neil, but can I ask something? What ten year old kid is even thinking about having sex of any kind? Isn’t ten years of age a little early for this kind of thing, much less for a six or an eight year old? If a little boy wants to wear lipstick or play with dolls and whatnot, his parents should give him a big hug and a grilled-cheese sandwich. But taking your ten-year-old kid to a gay pride parade suggests a kind of comme ci comme ca complicity in nudging him into the edges of sexual activity…no? Or at least acquainting him with the general realm?

I used to read nudie magazines when I was eight or nine so don’t tell me, but I didn’t hit puberty until I was 12 or 13. People get there when they get there, some of us sooner rather than later. But I’m not sure I’d be quite so publicly involved in endorsing my child’s sexual identity if they were only six or eight or ten, for God’s sake. What’s the rush?, take your time, etc. My first act of intimacy happened when I was 17 or thereabouts. I’m trying to imagine my stodgy parents publicly proclaiming their support of my reading nudie mags and playing doctor with girlfriends and being an eager-beaver hetero when I was eight or nine or ten. If they had done this I would have been fairly freaked out, I think.