Obviously I’ve been in the tank for Luca Guadagnino‘s Call Me By Your Name since last January’s Sundance premiere, but no more than any of the other big HE favorites in recent years — Manchester By The Sea, 12 Years A Slave, Zero Dark Thirty, A Separation, Birdman, Silver Linings Playbook, et. al. Naturally I’ve been expecting to see this landmark film play the Telluride Film Festival. Everyone regards TFF’s annual offerings as pretty much the finest distillation of early-to-mid-fall smarthouse or award-friendly cinema, so how could Guadagnino’s film not begin its award-season adventure there?

If a really good film starts its journey in Telluride or for that matter Venice (like Alexander Payne‘s Downsizing will), it will automatically radiate a special tingle vibe or savory aroma throughout the season. A Telluride debut is a gold-seal thing whereas a Toronto premiere is…well, lively and certainly welcome but without that special aromatic lift. 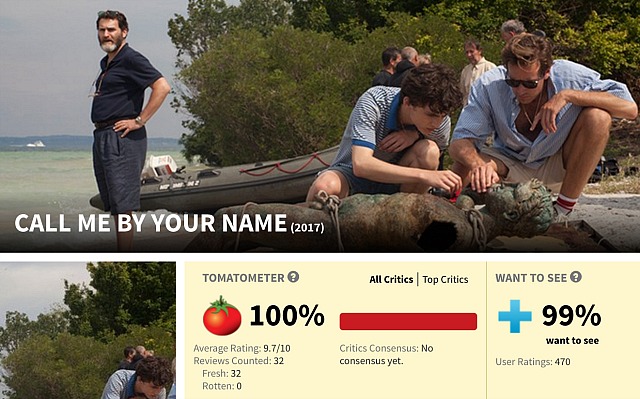 Which is why I went into a state of catatonic shock yesterday when I learned that Call Me By Your Name has been heave-ho’ed by Telluride’s Tom Luddy and Julie Huntsinger. Not due to a lack of admiration or respect (or so I gather) but because of organizational egos and politics. CMBYN‘s apparent sin was having had its world premiere at Sundance ’17 plus a European premiere the following month at the Berlinale. Telluride has screened only three Sundance debuts in its entire history, I’m told.

Yes, Manchester By The Sea was shown at Telluride ’16 eight months after debuting at Sundance, but that was because Telluride mounted a special tribute to Casey Affleck. The Affleck tribute, of course, was just an institutional ploy to sidestep Telluride’s own edict or disinclination to show Sundance films. Had they been so inclined Tom and Julie could have easily justified screening CMBYN by running a special Luca Guadagnino tribute.

Festival politics can be such bullshit.

What will this do to Call Me By Your Name‘s award-season profile? Not that much — it’s a masterful film by any measure, in any climate — but within the industry-journo realm that I live in the Telluride dismissal feels emotionally shattering.

Message to wealthy types who will be plunking down $4900 for their Patron passes: Telluride 2017 could be screening one of the most lulling, humanistic and richly embroidered romances of the 21st Century thus far, a love story that really transports and transforms, a film that everyone will be talking about this fall. But it won’t be because of viewings that happened in Park City and Berlin (galaxies far, far away) several months ago.