Night of the Living Roger

Milton Lawson to Jeffrey Wells: “Longtime fan of the site, here to show you a new short story you might enjoy called ‘Roger Ebert and Me‘. It’s a short 10-page comic about a true Movie Catholic enduring a crisis of faith. Filled with cinematic easter eggs. I know you’re not the biggest fan of the comics medium but sometimes it can be put to great use beyond the spandex superhero realm. Check it out? Here it is.

Wells to Lawson: It’s perfect up until the moment where your character talks about his mother, and Roger says she wouldn’t want you to give up hope. That’s fine, but it goes off the rails after that. Roger is not the Silver Surfer. He cares and has great insight, but he doesn’t have special cosmic powers, and he’s not the bringer of perfect, inspired solutions. He was just a brilliant critic who died too soon. You can’t put him on too high of a pedestal. 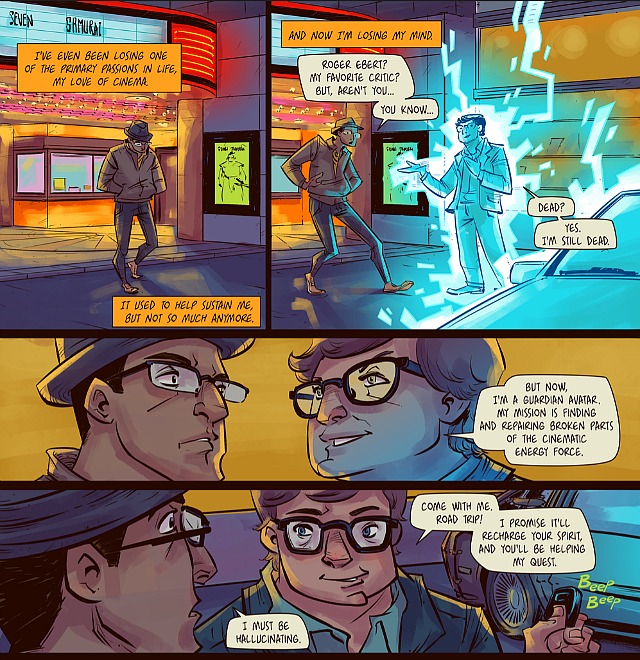 What needs to happen is this: You and Roger visit the diner where the Looper scene with Bruce Willis was shot. (Or the Baltimore diner from Barry Levinson‘s Diner.) As you’re walking toward an empty table, Roger notices Gene Siskel talking to another young cineaste like yourself.

Roger: “Uhh, Gene? The hell are you doing here?”

Gene: “Well, I’m dead too so I can do anything I want. And I can dispense life wisdom as well as you can, Roger, and probably a little better.”

Gene: “Oh…Roger, this is Kevin Zackey, by the way. Kevin? Roger. Kevin’s going through a rough patch.”

Roger: “Gene, this really upsets me. I want to know where you get off playing the great sage movie critic from heaven when that’s my designated role…I own it, it’s mine, they made me a promise.”

Gene: “They? Did you get it in writing? C’mon, Roger…climb off your high horse. We’re cosmic avatars now. Anything goes.”

As Roger and Gene bicker and insult, you and Kevin excuse yourselves and head out to the parking lot for a final round of philosophizing and musing about the crazy unfairness of it all, and laughing about it, and maybe discovering a reason to push on, keep going, never say die, etc.

By the way: Virtual reality is a window into something more, I agree. I was turned on in a very special and penetrating way by Inarritu’s Carne y Arena. But it can’t replace cinema because it’s financially untenable on a mass scale. And it’s really a gimmick…c’mon. It will degrade the culture and discourage interest in narrative drama and comedy. The world had classic proscenium-arch theatre and cinematic representations of same going back to the Greeks, and now 21st Century moron culture (led along by the corporations) is looking to dismantle this whole grand tradition, and in the space of 25 or 30 or 35 years. If that’s not a metaphor for the decline and fall of Western Civilization, I don’t know what would be.