Last night’s screening was Lysa Heslov‘s Served Like A Girl, which did well review-wise at South by Southwest ’17. Five women veterans who’ve endured serious trauma in the military create a shared sisterhood to help the rising number of stranded homeless women veterans, etc. It’s basically about women persevering, surviving and sticking together through thick and thin. Particularly mothers and daughters. Sad but stirring. Edited, scored with spunk and polish. I felt it. It got me. 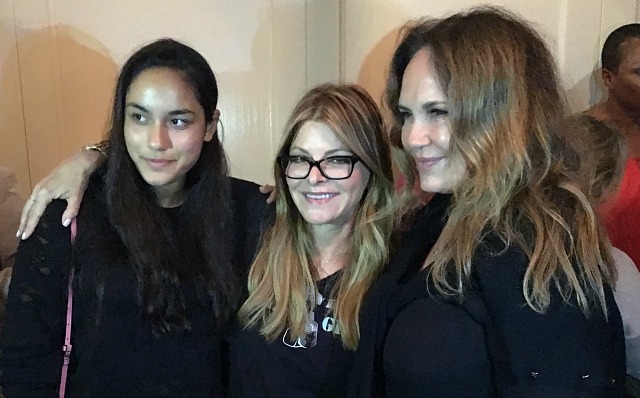 Lysa Heslov, director & co-writer of Served Like A Girl, flanked by Catherine Bach (Dukes of Hazzard) and daughter following Monday’s screening at the London West Hollywood.

From Shari Linden’s THR review: “Glamorous gowns are definitely involved, and yes, there’s a talent contest, but the Ms. Veteran America competition is no beauty pageant in the conventional sense. The gutsy women who vie for the title come in all shapes and sizes. They’ve served in Afghanistan and Iraq, some have suffered dire injuries, and they’ve all weathered plenty on the home front as well. The participants profiled in Heslov’s documentary are the epitome of resilience, but they’re also disarmingly honest and funny as hell. In a word, they’re irresistible.

“Focusing on seven women involved in the 2015 competition (the fourth edition of the event), Served Like a Girl takes a while to find its groove. But as it sheds light on these women’s experiences and the larger issue of homelessness among female vets, the film grows deeply engaging. Whatever the perceived or real political and social divisions between military families and the rest of us, this rousing nonfiction feature by Heslov, a producer making her directorial debut, suggests there’s far more common ground than many might suspect.”