How Did It Play in East Hampton?

“I saw mother! with an almost full house last night in East Hampton, New York. An older, dare I say erudite crowd — I don’t know how I got in. It played well until the end. One walk-out in front of me that I saw. A lot of uncomfortable laughter during the post-birth pass around. And then a little stunned silence at one critical moment. The very end plays pretty cool with some people, those who were giving what they’d just seen a pass because of the payoff. That’s the sense I got from chatter on the way out. But Mrs. McCuddy isn’t forgiving me any time soon. She turned and said ‘That’s the worst movie ever made.’ And we aren’t remodeling the country home any time soon either.” — HE’s own Bill McCuddy.

“No. It’s more like Aronofsky meets Salvador Dali or Luis Bunuel (they were friends). It’s a Surrealistic Pillow. It’s the year’s best movie to watch high. But it’s not something to literally pick apart at the seams. That takes all the fun out of it.” — Indiewire‘s Anne Thompson. 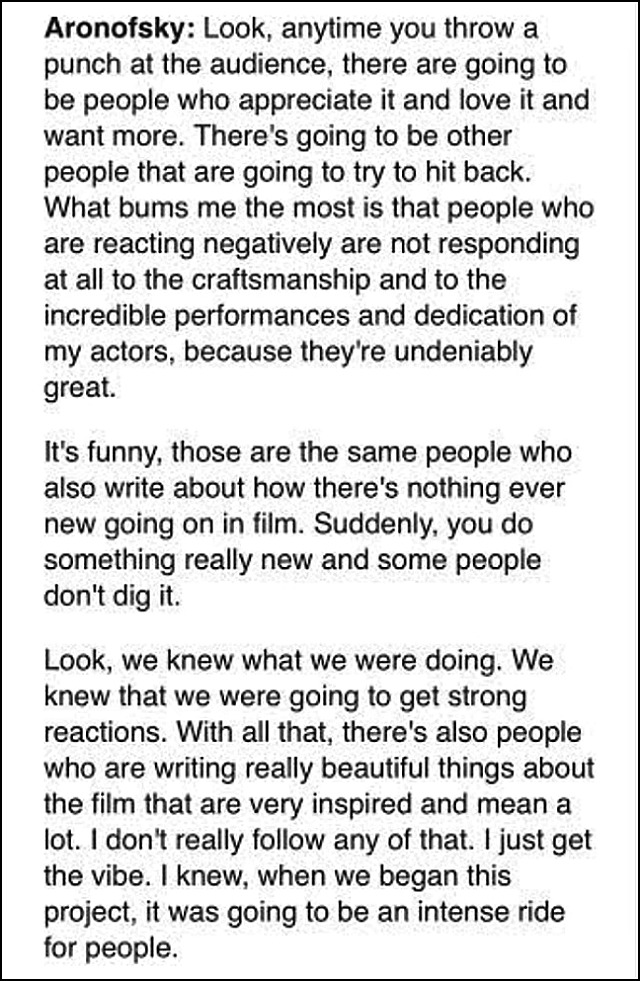 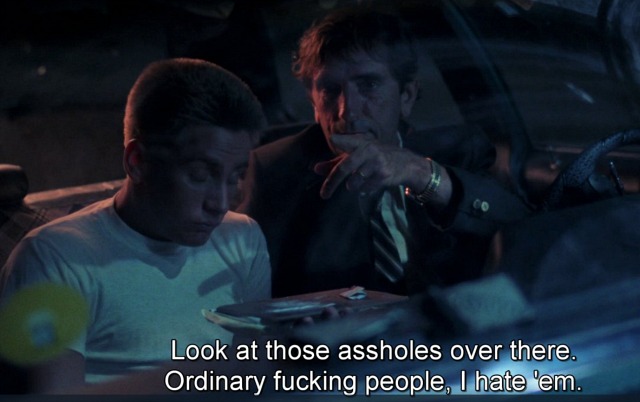 “mother! is split into two halves, with the first made up of events from the Old Testament: Adam (Ed Harris) and Eve (Michelle Pfeiffer) arrive and commit the original sin (shattering Bardem’s crystal), their twin boys are Cain and Abel, [and then] a sink explodes and causes a flood. The second half is the New Testament updated to our chaotic times. The imagery Aronofsky evokes in his climactic sequence brings to mind Abu Ghraib, the Iraq War, the European migrant crisis and more. The differences between the halves are not subtle — the first finds Lawrence’s character slowly losing patience, while the second is a complete violent assault — but that’s Aronofsky showing just how rapidly our world has gone to hell in the last century, and why we have no one to blame but ourselves. mother! is an indictment of humanity, a scripture that chronicles the raping of the earth across centuries.” — Indiewire‘s Zack Sharf. 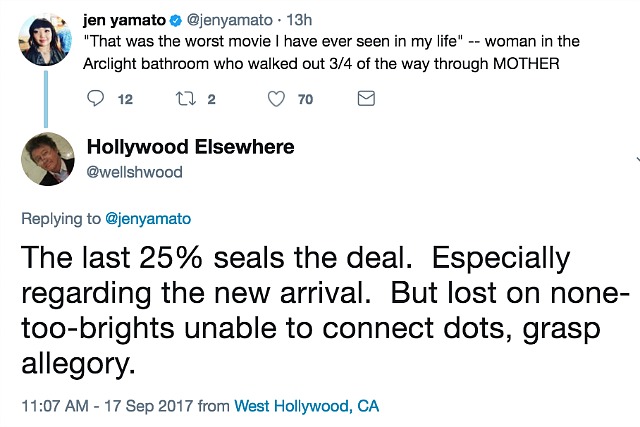 September 17, 2017by Jeffrey Wells16 Comments
« Previous post
Not With A Gun Pointed At My Head
Next post »
Carpenter Wants A Little Respect