For once I completely agree with Variety‘s KrisTapley about something, or more precisely the leading Best Actress Oscar contenders — The Shape of Water‘s Sally Hawkins, Frances McDormand‘s angry mom in Three Billboards Outside Ebbing, Missouri, I, Tonya‘s Margot Robbie, Lady Bird‘s brilliant Saoirse Ronan and The Post‘s Meryl Streep.

I haven’t even seen The Post yet (catching it this afternoon) but I really don’t see this lineup changing between now and nomination day in January. Tell me who, if anyone, can break in and dislodge one of these five.

If you asked me to pick a dark horse contender who really deserves a nomination regardless of the market odds, I would say Diane Kruger‘s lacerating turn in Fatih Akin‘s In the Fade. But it’ll never happen.

To have gone from being led by arguably the finest, most forward-thinking U.S. President in decades to arguably the absolute worst animal to hold public office in the history of democracy is just…shattering, devastating, soul-crushing. Variety‘s Scott Tobias: “Add…the splash of cold water on Election Night and The Final Year feels like the end of a story no one intended to tell. With the U.S. backing out of the Paris climate deal, decimating the State Department, and, most recently, reintroducing its trade embargo against Cuba, President Trump has leveled all those tough negotiations like a kid kicking down a sand castle. Try as it might, the film can’t spin its way out of despair.”

HE favorite Call Me By Your Name has scored six 2017 Spirit Award nominations, compared to five for Get Out and Good Time and four for Lady Bird and The Rider. If you know anything about Spirit Award-voting tendencies, the six noms — Best Feature, Best Director (Luca Guadagnino), Best Editing (Walter Fasano), Best Male Lead (Timothee Chalamet), Best Supporting Male (Armie Hammer) and Best Cinematography (Sayombhu Mukdeeprom) — make CMBYN (a) an odds-on favorite to take the Best Feature Spirit trophy and (b) locks it down as a major Oscar nomination threat on these fronts, particularly Best Picture.

Over the last three years, the Spirit Award Best Feature prize and the Best Picture Oscar have been won by the same film — Moonlight, Spotlight and Birdman. It’s happened, in fact, in five out of the past six years, starting with 2011’s The Artist. The Spirits didn’t go for Argo in 2012, but they went for 12 Years a Slave in ’13 followed by Birdman, Spotlight and Moonlight.

All of those Gurus and Gold Derby group-thinkers who’ve been listing Call Me By Your Name in sixth or seventh place on their roster of most likely Best Pic contenders are now twirling around and saying to themselves, “Uh-oh…hamma hamma hamma…I’d better recalculate my predictions and upgrade Luca’s film to at least second or third place or people will think I’m out of step with the culture!” Trust me, they are literally muttering this to themselves right now.

I’ve been saying that while 2016 Best Picture Oscar for Moonlight was largely about making up for “Oscars So White”, 2017 is, performance-wise and possibly otherwise, about the Year of the Ballsy, Go-For-It Independent Woman — Greta Gerwig and Saoirse Ronan‘s Lady Bird triumph, Meryl Streep‘s Katharine Graham performance in The Post, Frances McDormand‘s lead perf in Three Billboards outside Ebbing, Missouri, Sally Hawkins as a fantasy-driven cleaning woman in The Shape of Water, Margot Robbie in I, Tonya.

And I mean especially in the current climate of women pushing back everywhere against workplace sexual harassment. It all fits together.

This told me that the most likely recipient of this cultural moment might be Lady Bird, and by that I mean guaranteed Oscar noms for Best Picture, Best Director, Best Screenplay, Best Actress and so on. That still seems likely, but before this morning I was half-presuming that Lady Bird might take more Spirit Award noms that any other film. But that hasn’t happened. Lady Bird has been nominated for Best Feature, Best Screenplay (Gerwig), Best Actress (Ronan) and one other.

Now this — this — is first-degree sexual harassment…creepy, leering, odious, manipulative. And just like that, the soothing, intellectually intriguing Charlie Rose interview — a staple of thinking people’s TV-watching habits for the last 26 years — is gone, out the window, poof.

Which isn’t to lament in any way, shape or form the punishment and pushback that Rose is now receiving (he’s just been whacked by CBS), but simply to say “too bad…really a shame.”

Next to the Washington Post‘s Charlie Rose saga, the Al Franken thing (aggressive kissing during USO sketch rehearsal, sophomoric pretend-boob-grabbing for a photo, alleged ass-fondling at Minnesota state fair) pales by comparison. Rose and Franken may share aspects of a certain older-male-privelege psychology, but 36 former SNL women who worked with Franken in the ’80s have posted a letter stating that “not one of us ever experienced any inappropriate behavior; and mention our sincere appreciation that [Franken] treated each of us with the utmost respect and regard.” Something tells me a similar congregation isn’t going to write a letter supporting Rose. 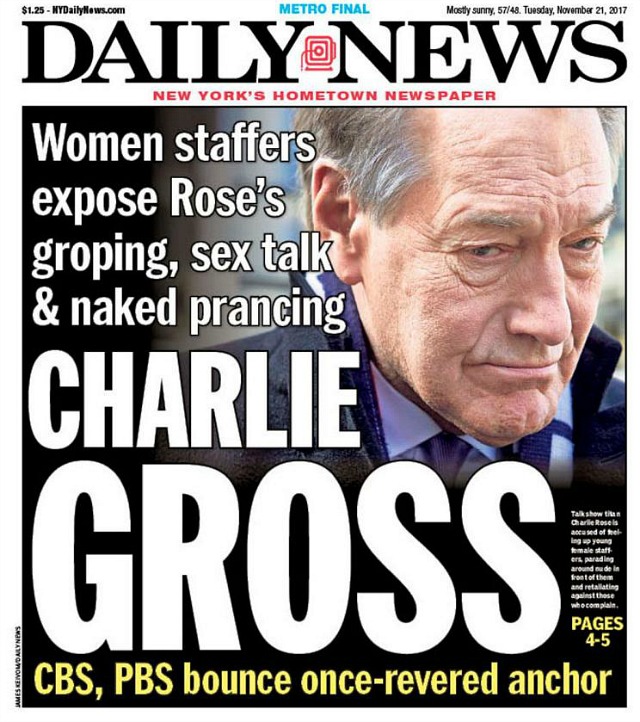 The default definition of net neutrality is more or less “a regulatory determination to protect the even-steven, no-special-priveleges, common-carrier nature of the internet. No big-money interests and corresponding URLs enhancing their position with the public via high-throttle delivery speeds.”

Two and 2/3 years ago Tom Wheeler‘s Federal Communications Commission ruled in favor of net neutrality. The rule took effect on 6.12.15. Now Trump’s FCC chairman Ajit Pai, a Republican flunky who was confirmed only a few weeks ago, has announced an intention to repeal net neutrality at its 12.14.17 meeting. He’s basically shilling for the rich guys, of course. Strong legal challenges will ensue.

Written in May 2014 by N.Y. Times media savant David Carr: “Why should you, as someone who just wants to use the web to surf or watch programming, care whether companies like Netflix and Hulu have to pay companies like Comcast and Verizon to ensure smooth feeds? Well, even though consumers won’t be charged directly for the faster service, we all know where those fee increases will end up landing.”

This MSNBC video essay about Donald Trump‘s involvement with Russia and vice versa last 14 minutes. That’s an awfully long viewing investment by today’s standards. I’m aware that many summations of Trump-Russia collusion and complicity have been posted. But to my eyes and ears, this one’s especially arresting.