End of Civilization As We Once Knew It

A three-day-old Buzzfeed article by Julie Gerstein has briefly revived the “Is Die Hard is a Christmas flick?” debate. This morning I addressed the topic on Facebook:

This is going to sound tiresome to the hipster-cynics out there, but there’s only one (1) Christmas flick that really and truly serves the spirit of that once-blessed holiday — the 1951, British-made A Christmas Carol (titled Scrooge in England) with Alastair Sim. Period. Other films have tried and nearly gotten there, but Brian Desmond Hurst‘s black-and-white classic comes from the same cultural fibre that sired and inspired Charles Dickens himself. Every time I’ve watched it (at least a couple of dozen times) it summons memories of family and community values that may have once existed, at least in my heart, and melts me right the fuck down.

And you’re gonna throw Bruce Willis and his bloody, glass-cut feet into the same bullpen?

If you want to put on your perversely ironic elf cap and cackle your ass off as you slam back a double-rum-shot egg nog, you can call Die Hard a Xmas flick…sure, heh-heh, why not?, fuck it. But in so doing you’ll be compounding the perversity and adding yet another layer of crust and cynical remove from a holiday that used to actually occasion a brief spiritual sea-change in people…a teaspoon of extra kindness that would sink in and lift all boats.

One of the many reasons that Christmas has felt more and more like a lesser thing has been the corroded, loathsomely insincere mindset that has allowed (wink-wink, fuck-all, who gives a shit?) for “Die Hard is a Xmas movie” to gain a semi-serious foothold in the cultural conversation.

And you know what? For all my feelings of pious denunciation, I have, all on my own, Alastair Sim notwithstanding, long associated this merrily calculating 1988 John McTiernan flick with (heh-heh) “the holidays.” Really. But in so doing all these years, I’ve said to myself “is the part of you that used to wear a semblance of true Christmas spirit on your sleeve…has that spiritual spark been completely narcotized?” The answer, of course, is ”well, not entirely but yeah, for the most part.”

And this is who we are and what we’ve become, Mr. Dickens. Sorry, brah, but it’s true. And so I say “Merry Christmas, Mr. Silver, Mr. Willis, Mr. McTiernan, Mr. De Souza!!…in keeping with the situation.” I’ve walked the London streets during the early Christmas season (37 years ago, to be exactly, when I was there to interview Peter O’Toole for GQ magazine.) And the Brits really know from Christmas spirit, trust me, just as surely as plastic American mall-fuck consciousness has been shitting all over the spirit of the occasion since the dawn of Reagan.

The only good thing is that I don’t drink egg nog any more. 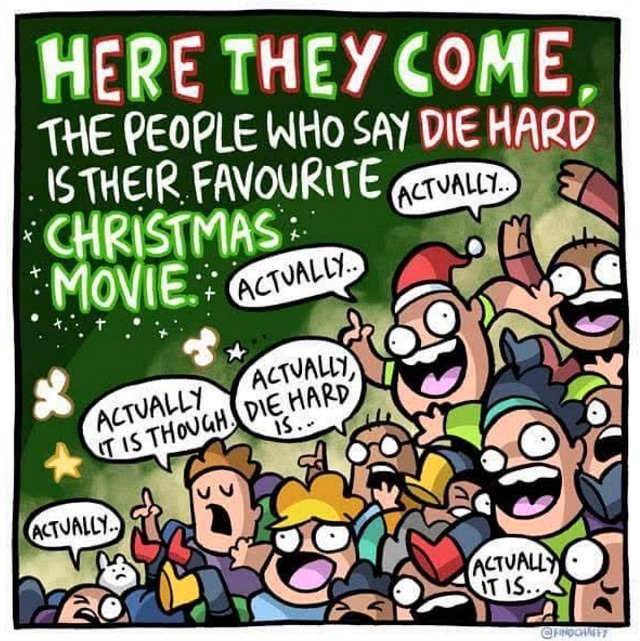