No columnist is obliged to riff on the death of Charles Manson, surely the most despised and deplored murderer and arch-criminal of the last 50 years, and probably the last century. An instinct is telling me that the less said, the better.

Manson’s brief destructive spree in 1969 made his last name into a kind of demonic brand, which in successive decades was used partly for ironic comedy. Manson Family Vacation, which I quite liked by the way. “Manson!”, the Lassie-like skit from the early ’90s Ben Stiller Show. Marilyn Manson.

No one’s forgetting, of course, that Quentin Tarantino‘s “Manson in the backdrop” movie will begin shooting in June.

Nobody has to ruminate on this monster or ponder his legend. Or poke a stick at it like a burnt-out fire. The best way to absorb the reality is via Karina Longworth‘s “You Must Remember This” podcast, which goes on for twelve episodes. For me the definitive Manson read is still Ed Sanders‘ “The Family,” with Vincent Bugliosi and Curt Gentry‘s “Helter Skelter” running a close second. 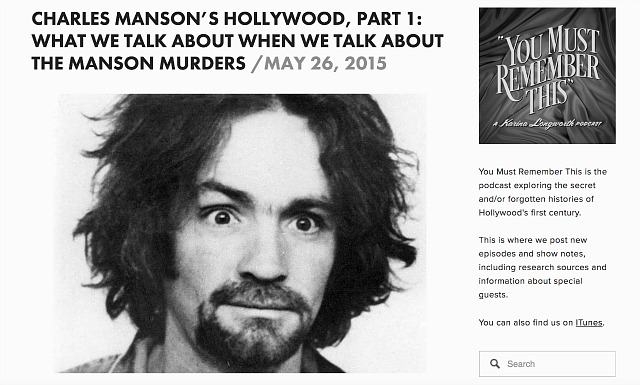