The Franken Thing Is Very Dispiriting

I really, really, really, really, really didn’t want to read this morning (or any morning for that matter) about Minnesota Sen. Al Franken being accused of groping and inappropriate kissing of a woman. Franken immediately apologized to his accuser, sports commentator Leann Tweeden, and to his staffers, allies and constituents.

The offensive acts happened during a 2006 U.S.O. tour of the Middle East, or two years before Franken was first elected Minnesota Senator.

I nod almost shoulder-shruggingly when women accuse loathsome Republicans like Donald Trump and Roy Moore of inappropriate sexual contact and/or groping or harassment (what else is new?), but it’s extremely distressing and even depressing when a brilliant liberal good-guy Senator gets hammered for same. 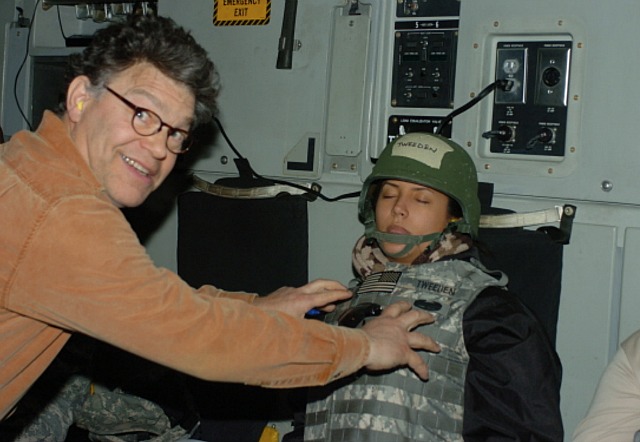 While this obviously lewd, frat-boyish photo indicates that groping was on Franken’s mind, it doesn’t show actual groping. There are shadows under Franken’s hands.

“The first thing I want to do is apologize,” Franken said in a statement. “To Leeann, to everyone else who was part of that tour, to everyone who has worked for me, to everyone I represent, and to everyone who counts on me to be an ally and supporter and champion of women. I respect women. I don’t respect men who don’t. And the fact that my own actions have given people a good reason to doubt that makes me feel ashamed.”

Franken lightly disputed Tweeden’s claim of inappropriate kissing, saying “I don’t remember [the incident] as Leann does” but also that he understands “why we need to listen to and believe woman’s experiences.”

The principal facts aside, it can be fairly stated that a photo that Tweeden posted of Franken allegedly groping her breasts while she slept doesn’t actually show this. Vulgar and fratboyish as Franken’s behavior seemingly was, if you look closely Franken is pretending to grab her breasts without actually doing so. (He may or may not have followed through after the photo was taken.) The comedic thrust of the photo is about Franken pretending to be an asshole sixth-grader, as if he’s saying “hey, let’s see if I can get away with this while she’s asleep!”

It’s still pretty bad, though. Franken noted in his statement that “the intentions behind my actions aren’t the point at all.”