To go by an 11.26 Guardian interview, Susan Sarandon is still loathed by the left. Deeply. Not so much for trashing Hillary Clinton (many lefties voted for Clinton while holding their nose) as her support for Bernie Sanders and particularly Jill Stein, whose presence on the Presidential ballot may have helped Donald Trump win the White House. Stein, for example, got 51,463 votes in Michigan, but Trump won that state by 10,704. Similar tallies prevailed in Pennsylvania and Wisconsin. 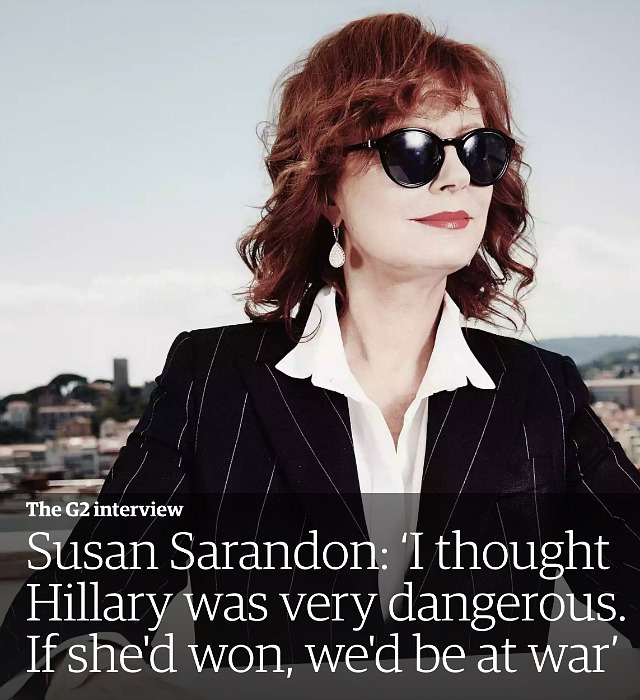 But Sarandon tells the Guardian‘s Emma Brockes that voting for Jill Stein in New York State was a harmless protest vote. “I knew that New York was going to go [for Hillary]…it was probably the easiest place to vote for Stein.”

Brockes asks Sarandon if she really said that Hillary is “more dangerous” than Trump. “Not exactly, but I don’t mind that quote,” Sarandon replies. “I did think she was very, very dangerous. We would still be fracking, we would be at war [if she was president]. It wouldn’t be much smoother. Look what happened under Obama that we didn’t notice.” Sarandon’s view isn’t that extreme. Peter Kuznick, co-author with Oliver Stone of “The Untold History of the United States,” said roughly the same thing three years ago. “Hillary’s foreign policy is very dangerous,” he said. “[She’s] Margaret Thatcher…such a smart woman, but such a simplistic narrative.”