In A Theatre Near You

From “Seen Better Days,” posted on 9.28.17: Directed and co-written by Richard Linklater, Last Flag Flying (Amazon / Lionsgate, 11.3) is a moderately passable older-guy road movie — a doleful, episode-by-episode thing about three ex-servicemen and former buddies — Larry “Doc” Shepherd (Steve Carell), Sal Nealon (Bryan Cranston) and Richard Mueller (Laurence Fishburne) — assessing their lives and the world around them as they escort the casket of Shepherd’s soldier son, recently killed in Iraq, from some city in Virginia to some other city in New Hampshire. 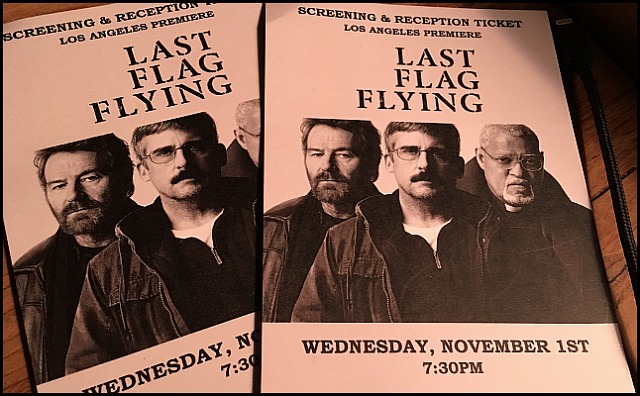 This is roughly the same path, of course, that the original film followed when Badass Buddusky (Jack Nicholson) and Richard “Mule” Mulhall (Otis Young) escorted Larry Meadows (Randy Quaid) to the Portsmouth brig for the crime of having stolen $40 from a polio donation box.

For whatever tangled reasons Linklater and original novel author and screenplay co-writer Daryl Ponicsan chose to re-name Buddusky as Nealon, Mulhall as Mueller and Meadows as Shepherd. This led to ignoring the Last Detail origin story and making the trio into Vietnam vets with a shared history.

The film mopes along in a resigned, overcast-skies sort of way, and after about 30 or 40 minutes you start saying to yourself, ‘Jesus, this thing is going to stay on this level all the way through to the end, and I’m stuck with it.’