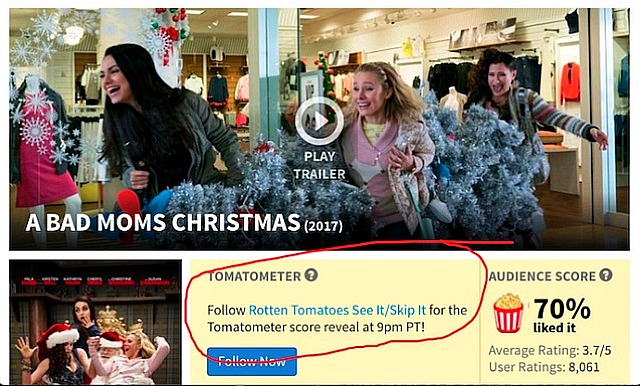 Posted on 11.2, 1:21 pm: Earlier today I wrote Rotten Tomatoes editors Tim Ryan and Grae Drake about a brief but curious situation involving Bad Moms Christmas (STX, 11.1). I told them that I recognize that Bad Moms Christmas is currently rated 28% on RT. (The Metacritic score is 42%.) But last night a critic friend from a major Eastern newspaper pointed something out, and so I asked if they could clarify.

“A Bad Moms Christmas, the terrible quickie sequel to Bad Moms, opened all across North America today,” the friend wrote. “There are all kinds of reviews online, as a Google search shows. Yet there’s no score on Rotten Tomatoes yet. When you go to the RT page for the film, there’s a note on it that says [RT is] “waiting until 9 p.m. Pacific for the ‘Tomatometer reveal‘”.

“I’ve never seen Rotten Tomatoes do this before,” he explained. “It means that the movie, likely to be judged ‘rotten’ by critics, gets a full-day free pass with no aggregated scores on RT. This is exactly what studios want, right? What do you think RT is up to?”

Three possibilities. One, my critic friend imagined that he saw the ‘waiting until 9 pm” notice. Two, Rotten Tomatoes posted the “waiting until 9 pm for a Tomatometer reveal” statement and then thought better of it. Three, it was some kind of accident or glitch.

Anyway, like I said, RT’s Bad Moms Christmas page is up and flashing so (a) whatever happened, happened and (b) it’s water under the bridge. But why they did they have that “wait until 9 pm” thing up? I doubt that my friend is the “seeing illusions” type. Two hours have elapsed since I sent my email to the RT editors; they haven’t responded.