I knew early on that I wouldn’t want to see David Ayer‘s Bright (Netflix, 12.22), much less review it. An obvious conceptual ripoff of Graham Baker‘s Alien Nation, I knew it would put me through anguish, frustration, irritation. I knew this, in fact, because of four factors. 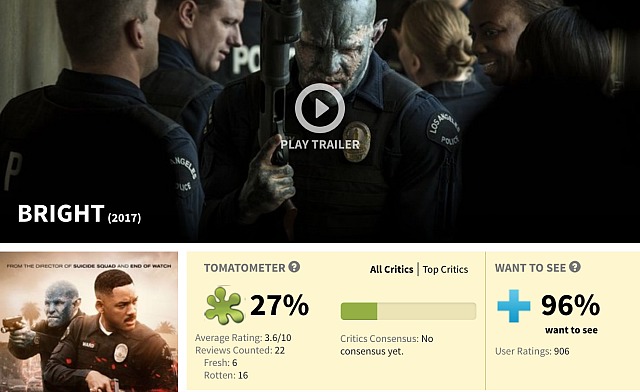 Reason #1: Will Smith, whose movies always either suck eggs or try my patience. I haven’t really liked a Smith film since Six Degrees of Separation.

Reason #2: “Antagonistic cop partners getting to know, respect and like each other as they investigate a crime or crime wave”…same old same old.

Reason #3: The script is by formula-roulette screenwriter Max Landis, whose ideas and writing style — “a pop-culture savant who synthesizes everything from pulp-fiction fantasy to Shane Black action-comedies into a kind of wild and witty blockbuster super-weapon,” according to Variety‘s Peter Debruge — represent the bane of my moviegoing existence.

Reason #4: Ayer has been off his game since End of Watch — Fury disappointed and Suicide Squad was mostly appalling. That was enough to stop me right there.

And now the reviews are in — 27% Rotten Tomatoes, 29% Metacritic. Case closed, end of story. Wait….Debruge likes it? “The best Netflix original movie to date”?

December 21, 2017by Jeffrey Wells37 Comments
« Previous post
Think About Willem Dafoe
Next post »
Let’s Hear It For The Boys