One For The Ages

Variety‘s Kris Tapley has posted his first Oscar nomination guesses of the season. In so doing he’s helping to promote a scenario in which his favorites (which he’s presumably decided upon, at least partly, after chatting up Academy members) will in fact be nominated. He’s helping, in other words, to confirm their legitimacy and favoring odds. As many of us (myself included) try to do during awards season.

But I am really and truly stunned that Tapley is apparently hearing and therefore “guessing” that Woody Harrelson‘s amiable, low-key sheriff in Three Billboards outside Ebbing, Missouri as well as Richard Jenkins‘ emotionally frustrated gay guy in The Shape of Water are more likely to snag a Best Supporting Actor nomination than Call Me By Your Name‘s Michael Stuhlbarg, for his performance as one of the wisest and most supportive dads in cinema history. 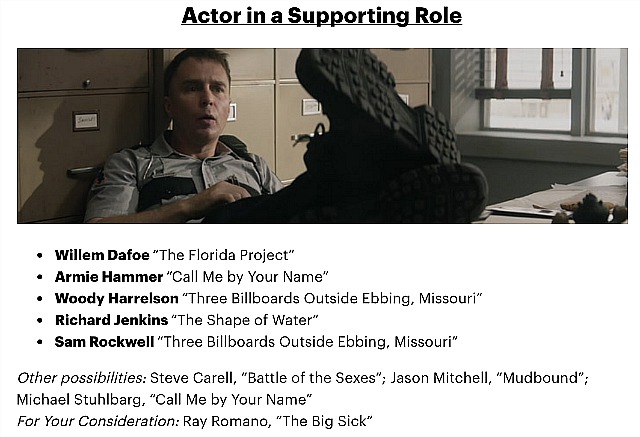 Stuhlbarg’s fatherly advice scene with Timothee Chalamet doesn’t move audiences — it melts them down, and I’m not just talking about the LGBT community. We’re all read the comments, heard the stories. Stuhlbarg’s gentle speech is a Beatrice Straight one-off — the kind of scene everyone talks about. If there’s another scene in any of the big award-season films that has wowed people to this degree, I’d like to know what it is. Good and admired as they are, Jenkins and Harrelson don’t come close to matching, much less surpassing, what Stuhlbarg delivers.

And yet Tapley is suggesting that Stuhlbarg’s CMBYN costar, Armie Hammer, will take one of the five Best Supporting Actor noms — a nomination that has Stuhlbarg’s name on it! Sure, Hammer might be nominated. He’s awfully good in Luca Guadagnino‘s film and has certainly “worked” the town enough. But c’mon.

It goes without saying that The Florida Project‘s Willem Dafoe and Three Billboards‘ Sam Rockwell are In Like Flynn.

December 26, 2017by Jeffrey Wells50 Comments
« Previous post
Time and Tide Wait For No One
Next post »
Hairpin Turn