A Droll Comedy About Cultural Conflicts

What defines a really successful comedy? Being funny, of course, and preferably in a way that’s not too coarse or lowbrow. Clever, witty, feel-goody. You want it to be accessible enough for Joe and Jane Popcorn to have a good time with it, but you also want film critics to stand up and salute. And you definitely want it to turn a healthy profit. Some comedies do well with critics but not so much at the box-office. Or vice versa. And some fizzle all around the track — cruddy reviews, low grosses, unpopular with popcorn munchers, etc. Very few comedies hit it on all four burners.

Not everyone realizes that Amazon’s The Big Sick, which opened on 6.23.17 after debuting at the 2017 Sundance Film Festival, has done exactly that. And this, by any fair standard, drops it into the Best Picture realm. 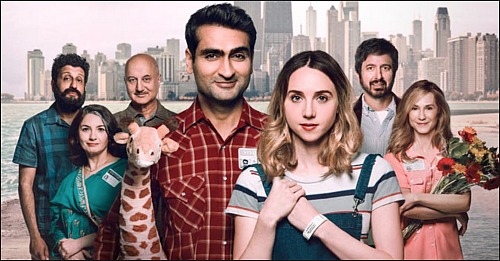 A dryly amusing indie comedy about ethnic issues affecting a relationship between Kumail (Kumail Nanjiani), a laid-back Pakistani comic, and Emily (Zoe Kazan), a spunky, willful white girl, The Big Sick managed a 98% Rotten Tomatoes rating and sold a shitload of tickets to Average Joes. It cost $5 million to make and earned $55 million worldwide, excluding ancillary revenue. Even if you throw in the “Hollywood bookkeeping” factor, you’ll still be well in the black.

The Big Sick has even become a top award contender in recent weeks. Holly Hunter‘s performance as Kazan’s mom has snagged several Best Supporting Actress nominations (the Independent Spirit Awards, several critics groups); ditto the screenplay (co-written by Nanjiani and wife Emily V. Gordon, and based on their actual romantic history) as well as the film itself being Best Picture-nominated by the Critics Choice Awards, the Satellite Awards and the Producers Guild of America.

Four burners plus the awards action makes five. Do I hear six?

I’ve seen The Big Sick three times, and each time it’s felt fresh and natural and sharp as a tack. It gains. After seeing it in Park City I called it droll humor for smarties and hipsters as well as dry and diverting. You never really know where it’s going, and that’s just how I like it. I loved the terrorist jokes (no, seriously), and it really does come together emotionally during the last 25%.

Nanjiani embroiders with a unique tone and sensibility, certainly within the realm of a modern American love story. He and Kazan hold things together for the first 40%, but it’s Hunter and Ray Romano (as Kazan’s dad) who bring it home. 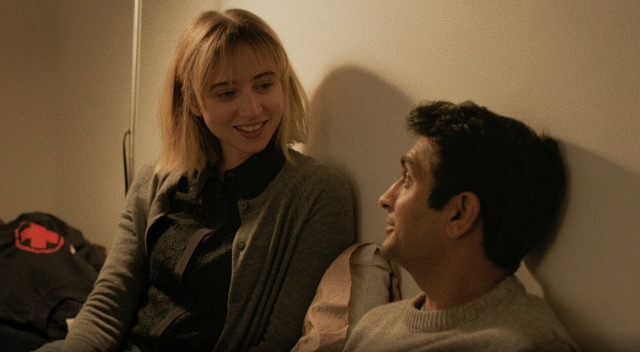 A romantic comedy is a film about a romance with laughs…right? And a family comedy is about a biological or workplace “family” working through some issue or problem in a way that delivers a comic attitude or bounce of some kind. What happens if you merge the two? And, while you’re doing that, if you inject a sardonic, mildly facetious sense of humor, and if you make the central situation turn on the cultural differences between a white American family (dad, mom, grown daughter) and a family of tradition-bound Pakistani immigrants?

The Big Sick is arguably the first romantic comedy in a dog’s age to re-shuffle the deck and create something really new. A 21st Century, post-9/11 romantic family comedy that doesn’t try to force the humor or follow any of the usual formulaic threads, but plays it calm and natural and lets the tale find in its own way. It’s not dealing the same cards as Billy Wilder‘s The Apartment, but it’s coming from the same general casino.

A story about a Pakistani comedian and a white girl from North Carolina — good enough. And then they have a fight about Kumail having concealed a somewhat embarassing family tradition that he was too chicken to share — which leads to a breakup. And then the story turns again when Emily gets sick and falls into a coma….where is this going? And then her parents, Terry and Beth, show up at the hospital, and then Kumail decides to hang around even though they’ve told him he’s not wanted…well, you’ve probably seen it, right? 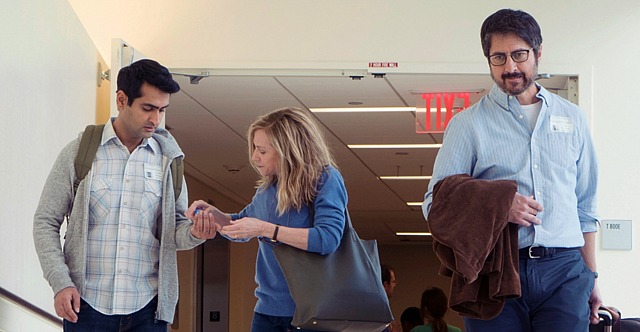 But if you haven’t, you should know that nothing that happens during Sick‘s second half is all that predictable. Nothing in this film follows the usual patterns. And it ends in a way that…okay, feels somewhat predictable but not in a way that you’ve seen before. Originality is really a great thing when it happens, and even more so when the plot elements are this nervy — comas, ethnic infidelity, a tyrannical Pakistani mother, arranged marriages, etc. Very odd stuff, at least from my white-bread perspective. But funny and nutritional.

I’m no Middle-Eastern scholar, but even I know that Pakistani parents are very strict when it comes to their children staying within the Muslim flock. If I had been in Emily’s shoes and I suddenly realized that my Pakistani boyfriend has been, in a vague manner of speaking, “cheating” on me by secretly meeting several prospective Muslim brides at dinners arranged by his mom…well, that’s a bit of a hot mess. So yeah, I might be kinda destroyed when the truth is revealed.

On the other hand I would probably try to ease up and “understand” after the initial anger. Kumail has been going along with this charade to placate mom. So yes, he’s been lying to you but he hasn’t been unfaithful, or not really. He should have copped to the dinners, of course, but he was too chicken, too cowed.

See what I mean? A romantic comedy of a different caste, to put it mildly.

January 8, 2018by Jeffrey Wells25 Comments
« Previous post
“A Raw-Looking Film”
Next post »
“We Are Here For The Work”