Three weeks ago I was half-agreeing with Tucker Carlson about the outraged reactions to Matt Damon’s mansplaining remarks (“spectrum of behavior”, “shouldn’t conflate”) in a televised chat with Peter Travers.

“There’s not a single sentiment in [what Damon said to Travers] that’s not defensible or that 90 percent of the American population would find over the top or outrageous,” Carlson said. “It’s all within bounds or it would have been last year.” 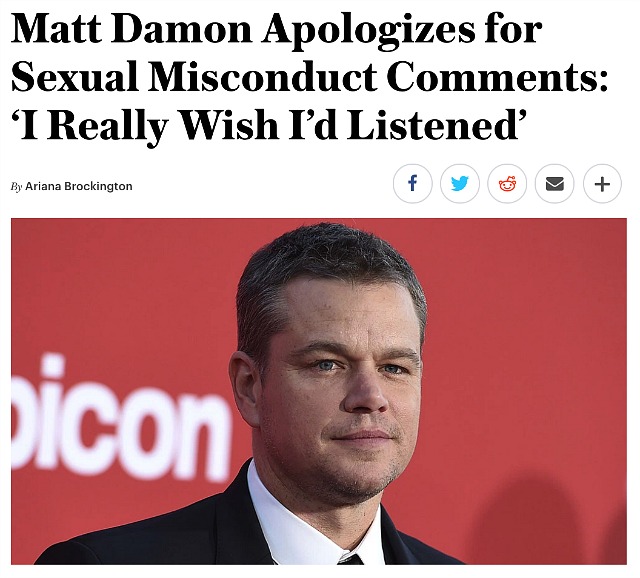 But the blowback was pretty bad, and Damon is only human.

During an interview this morning on the Today show with Kathie Lee Gifford, Damon apologized and pleaded for forgiveness for having the temerity to share what he thought. The gist of Damon’s earlier comments were that (a) there are some really bad guys out there (i.e., Harvey Weinstein) as well as (b) some mildly shitty guys, (c) some flawed but not-so-bad guys (Sen. Al Franken) as well as (d) regular guys who’ve never pawed or assaulted anyone and are okay to have around. But that category (a) shouldn’t be conflated with categories (c) and (d).

“I really wish I’d listened a lot more before I weighed in on this,” Damon told Gifford. “Ultimately, what it is for me is that I don’t want to further anybody’s pain with anything that I do or say. And so for that I’m really sorry. A lot of those women are my dear friends and I love them and respect them and support what they’re doing and want to be a part of that change. But I should get in the back seat and close my mouth for a while.”