Doesn’t the fact that Judd Apatow‘s The Zen Diaries of Garry Shandling (HBO, 3.26 and 3.27) runs four and a half hours…shouldn’t that fact alone warrant special interest among Shandling fans, of which there are still many? I loved Garry’s angst, his depressive personality, his low self-esteem…I’m talking worship here. But I have to say I liked Shandling in his 40s and 50s better than the older version. His hair, for instance. Shandling had great wavy follicles in the ’90s but was down to a tennis-ball cut after Obama got elected. And his eyes got smaller — they were big and expressive in his 40s but slitty and beady in his 60s. And I don’t know about that Zen thing he got into, and I’m saying this as a former Bhagavad Gita guy. Garry once wrote “you don’t need to be anything, you can just be.” The only people who say or think that are filthy rich or completely devoted to abstinence and poverty, and Shandling wasn’t among the latter. The poor guy died of a heart attack on 3.24.16, at age 66. If there’s anything beyond death, Garry is surely part of it now, dispersed into a trillion particles of consciousness or possibly transformed into a perfect smile.

Hold on, let me get this straight. The same woman who called the FBI on 1.5.18 and told them chapter-and-verse about Parkland shooter Nikolas Cruz, that he’d bought several weapons with his late mother’s insurance payout and that he’s stupid and has murdered and cut up some animals and that he might be “getting into a school and just shooting the place up” because she knew “he’s going to explode”…that same woman also called the Broward County sheriff’s office, and neither the Broward guys nor the FBI did a damn thing about this, and as a result 17 people inside Stoneman Douglas High School (mostly students) were slaughtered by Cruz on 2.14, or roughly five weeks later?

Here’s a transcript of the call to the FBI.

This is completely insane — the FBI was told exactly what would happen and exactly who the bad guy was, and they didn’t do jack squat.

The best love stories are about relationships that don’t work out. Which is what Dominic Cooke‘s On Chesil Beach (Bleecker, Street, 5.18), an adaptation of Ian McEwan’s same-titled 2007 novel, is basically about. Set in early ’60s Weymouth, Saoirse Ronan plays Florence, an independent-minded lass who develops reservations about getting married to Edward (Billy Howle) and particularly about the confined, straight-laced life she’ll be expected to lead. And then it all falls apart over sexual anxiety.

I saw On Chesil Beachduring last September’s Toronto Film Festival, and I somehow knew it wouldn’t be much even before I sat down. I could feel the minor-ness. The problem, for me, was that it was more about pre-marital misgivings than anything else, and I just didn’t give a damn whether Ronan and Howle “did it” or not, or whether or not they wanted to get married or anything. I couldn’t have cared less.

Honestly? I cared so little about their doomed relationship that I left around the 75-minute mark, and quickly decided I wouldn’t write about it because I’d missed the last half-hour or whatever. Now I’m breaking my promise because the trailer has dropped.

Who wants to see a movie with that title anyway? It’s like calling a movie On Swizzle Stick. I wasn’t even sure how to say “Chesil” when I first saw it on the page — I think it’s pronounced chezzle. (The actual Chesil Beach is located southwest of Weymouth, which is part of Dorset County in southwestern England.) It sounds like a shitty little beach with a lot of rocks and pebbles that will hurt your bare feet if you take a stroll, and who wants to go through that?

Rita Moreno‘s Anita in West Side Story was a great, full-spirited spitfire performance, but let’s be honest — she won her Best Supporting Actress Oscar on the coattails of a massive West Side Story sweep. The 1961 musical won 10 Academy Awards that night, but even its biggest fans were surprised when George Chakiris‘s Bernardo defeated George C. Scott‘s rattlesnake gambler in The Hustler. Nonetheless Moreno was the first Puerto Rican…hell, Latina actress to win such a prize, and that was no small historic thing. But Moreno (who was still involved in her eight-year-long affair with Marlon Brando at the time) was so blown away that she didn’t say anything at the podium — no thanks to director-producer Robert Wise, no shout-out to fellow cast members or other Latina actresses, nothing.

Separate Tables is exactly the kind of solemn, stiff-necked talkfest that was often regarded as Oscar bait in the mid-to-late ’50s. Decorum and public appearances undermined by dark secrets and notions of perverse sexuality, etc. Shudder! Erections and dampenings that dare not speak their name, or words to that effect.

Talk about “a long time ago in a galaxy far, far away,” etc. Two years before Separate Tables appeared a creepy, low-budget sci-fi thriller called Invasion of the Body Snatchers opened and was promptly ignored by the highbrows. Four years earlier (in ’54) The Creature From The Black Lagoon was greeted with similar indifference if not disdain. Today a pair of direct descendants, Get Out and The Shape of Water, are Best Picture nominees, and there’s a better-than-even (though admittedly dwindling) chance that Shape will take the Big Prize. 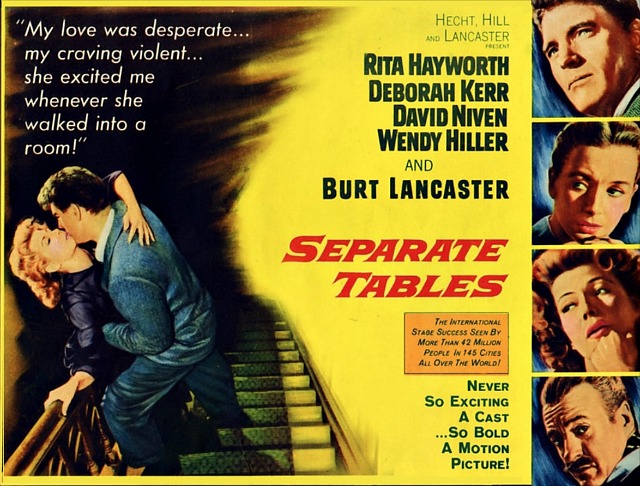 Yesterday I received a hilarious, spot-on essay by the great David Thomson — about Separate Tables initially, but also about how the appeal and some of the “Academy inflation” of this 60-year-old film are echoed in I, Tonya and Three Billboards outside Ebbing, Missouri.

Consider this excerpt especially: “About fifteen minutes into I Tonya, on being bowled over by the vicious hangdog look of Allison Janney’s mother, the toxic lines slipping like smoke from the fag on her lips, I was ready to give her the supporting actress Oscar on the spot. Twenty minutes later I was bored with her because she was still doing the same bitter schtick. She’s an act, a show-stopper, the sort of hag who would get a round of applause as she appears on-stage, severing any prospect of dramatic truth.

“It’s not that Janney is less than skilled, or hasn’t paid her dues for decades. She’s a clever old pro so give her the Oscar. But let’s abandon the myth that she is presenting a real ‘deplorable’ instead of saying, ‘Aren’t deplorables a riot?'”

Here’s the whole brilliant piece (the first 17 paragraphs about Separate Tables, and the rest about Janney and Margot Robbie in I, Tonya and McDormand in Three Billboards):

“I found myself watching Separate Tables on Turner Classic Movies. There it was, offered with the seemingly unassailable claim that it had been nominated for Best Picture in 1958 along with six other nominations. It even had two wins, and I remembered that one of them was for David Niven playing a bogus Major. I had seen the film in 1958 and flinched at it even then (the bogus business was all fusspot), in a year that included Vertigo, Touch of Evil, Bonjour Tristesse, Man of the West, The Tarnished Angels and many others that still seem of value.

Late yesterday afternoon the Academy announced that scuttlebutt to the contrary, Sufjan Stevens will perform “Mystery of Love” on the March 4th Oscar telecast.

Hollywood Elsewhere has a notion that the Call Me By Your Name guys were just as surprised and elated as I was by this decision. Direct quote from director Luca Guadagnino from his home in Crema, received at 8:28 am Pacific: “FANTASTIC!”

It was pure coincidence that producers Mike DeLuca and Suzanne Todd announced this hours after yesterday’s HE rant about rumors (which were first aired by Gold Derby‘s Chris Beacham) that Stevens might be eliminated from the show. And the announcement was not a reversal of an earlier indicated position when DeLuca and Todd didn’t ask Stevens to perform when they first invited him to attend the show. (In a 2.3.18 interview with The Hollywood Reporter‘s Michael O’Connell, Stevens said that he might not perform “Mystery of Love” during the ceremony since “they’ve only asked if I’m going to attend.”)

No, seriously — I think the Academy did respond to pressure from some quarter. Maybe the Sony Classics guys called up and said “Yo, what da fock?” 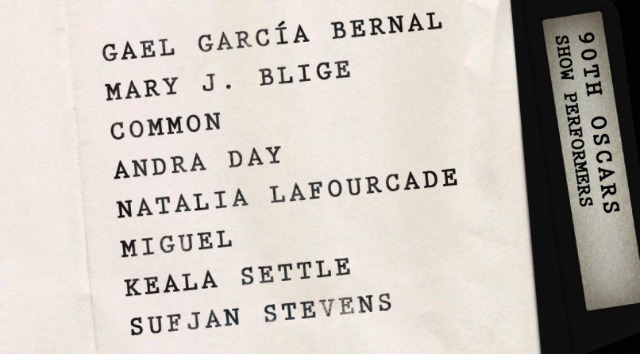 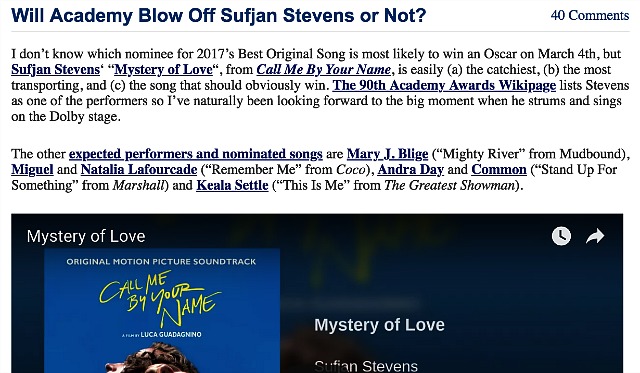