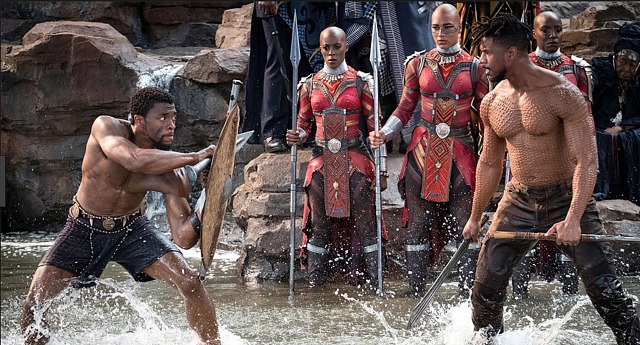 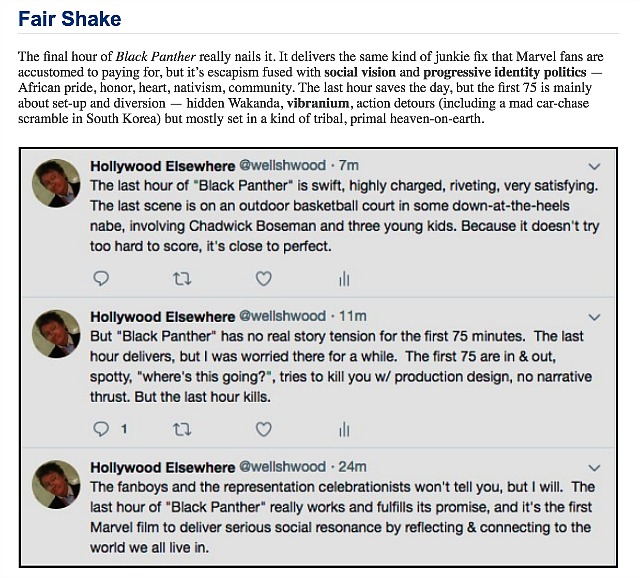 TheWrap‘s Alonso Duralde mentions “the film’s occasional pacing lapses” but calls them “forgivable.” Screen International‘s Tim Grierson allows that the story is “a little plodding.” The Playlist‘s Rodrigo Perez says that while certain “expounding preludes are flat and patchy, once Black Panther [finally] gets out of its crouching position and goes on a sprint, it’s an engaging ride that rarely lets up.”

Alluding to the faintly noddy, waiting-for-full-engagement section, Time‘s Stephanie Zacharek asks, “What would this film have been like if its action scenes had been cut cleanly and clearly, instead of chopped into the usual wasteful, visually confusing slice-and-dice mashup?”

See what I mean? They’re afraid to quibble or complain for the most part. They know Black Panther is going to be super-huge and they don’t want to seem as if they don’t get it or are in any way reluctant to celebrate this. Most critics are cowards. Have I been an occasional coward in the past? Yes. Have I ever sidestepped or diluted my real, deep-gut reactions to this or that film? I regrettably have from time to time. But so far I’m the only one to declare plain and straight that Black Panther, good as it ultimately is, doesn’t really get going until after the one-hour mark.