I’m as startled and saddened as everyone else about the sudden death of composer Johann Johannsson. He was found dead yesterday in his Berlin apartment. Hugs and condolences to family, friends, colleagues and fans of this gifted artist, who was only 48. 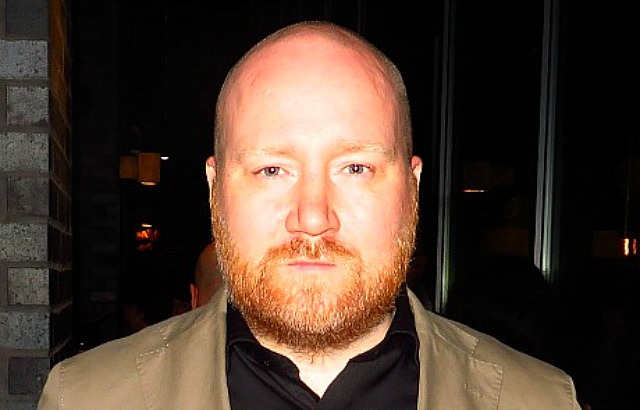 Johann Johannsson during Toronto Film festival’s Theory of Everything after-party in September 2014.

I last spoke with Johannsson during the 2014 Toronto Film Festival, when he was doing interviews to promote his Theory of Everything score, which wound up winning a Golden Globe award in early ’15. An amiable fellow, obviously bright, etc.

We actually had our longest chat during the TIFF Theory of Everything after-party. I especially recall Johannsson reminding me about Alex North having composed a rejected score for 2001: A Space Odyssey, and that it’s purchasable online.

I was totally turned around by Johannsson’s churning, disruptive score for Darren Aronofsky‘s mother!.

Johannsson’s last completed score was for Garth Davis‘s Mary Magdelene, which Universal will open on 3.22.

Who dies suddenly at 48?

February 10, 2018by Jeffrey Wells24 Comments
« Previous post
Historic Convergence of Icarus and ’18 OIympics
Next post »
Eye of the Beholder