Last night’s Virtuosos celebration at the Santa Barbara Film Festival — moderated by Dave Karger, attended by Kumail Nanjiani (The Big Sick), Timothee Chalamet (Call Me By Your Name), Daniel Kaluuya (Get Out), Hong Chau (Downsizing), Mary J. Blige (Mudbound) and John Boyega (Detroit) — was easily the loosest, funniest and most spirited I’ve ever witnessed, and I’ve been watching Virtuoso events since whenever they began. Nanjiani and Chalamet were the stand-outs, closely followed by Kaluuya.

I exchanged greetings with Chalamet at the after-party, and I was kind and considerate enough not to mention his recent decision to throw Woody Allen under the bus. I understand why he went along with the mob on this one. He has a career to protect and obviously needs to be in league with the cool kidz. It’s very easy to stand outside the arena on Monday morning and say “I would’ve acted differently or more thoughtfully” or what-have-you.

By the way: Nanjiani said he’ll be starring in a “low-budget” thriller for director Ferdinando Cito Filomarino, whose 2010 short, Diarchia, I happened to see last year. I personally know Filomarino as “Ferdy” via HE’s own Luca Guadagnino. Nanjiani didn’t mention a title, but it’s set in Greece and will begin filming in August, he said. Contracts are being ironed out as we speak. 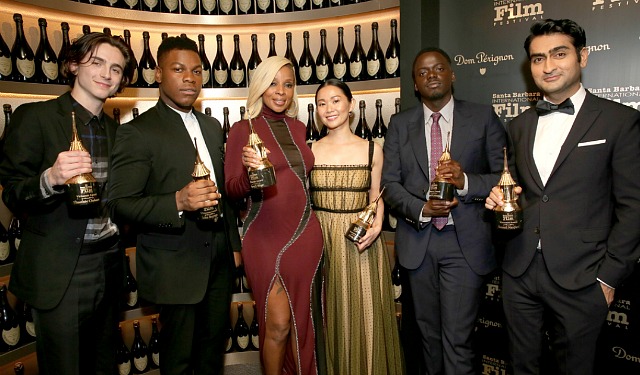 February 4, 2018by Jeffrey Wells10 Comments
« Previous post
Beauty and Duty
Next post »
Only In It For The Money